Let us start the Law of Variable Propotions .

If you have your favourite ice-cream and start eating during a sunny day, first bite may bring you to knees while groaning “hai, hai, hai”.The next bite too brings good but different effect.By the time yu are halfway thorough gallon, you may be feeling totally different.With each chance, your stomach may become full, but mind has a new experience and the point of diminishing returns shifts. This what we are going to discuss here in the name of Law of Variable Propotions.

The law of variable proportion is the most important law in economics. Economists like Alfred Marshall, Benham,Samulson contributed maximium to this law.This law is based on short run production function.

2. Effect of continuous increase of variable factors on Fixed Factors and on output in the short run.

3 How this Law operates in each and every stage of life?

Let us start with the concept of a standard short run production function.

L→Labour as the variable factor

→ Capital as the constant factor

The Law of Variable Proportions which is the new name of the famous Law of Diminishing Returns.

→According to Stigler” "As equal increments of one input are added, the inputs of other productive services being held constant, beyond a certain point, the resulting increments of produce will decrease i.e., the marginal product will diminish".

→According to Paul Samulson "An increase in some inputs relative to other fixed inputs will in a given state of technology cause output to increase, but after a point, the extra output resulting from the same addition of extra inputs will become less".

→Constant technology--- This law assumes that technology does not change throughout the operation of the law.

→Fixed amount of some factors.—One factor of production has to be fixed for this law.

→ Possibility of varying factor proportions—This law assumes that variable factors can be --changed in the short run.

1,Total Product→ It is the total of output, resulting from efforts of all factors of production.

2Average Product→It is the total product per unit of the variable factor.

3.MarginalProduct→It is addition made to the Total Product as a result of production of one more unit of 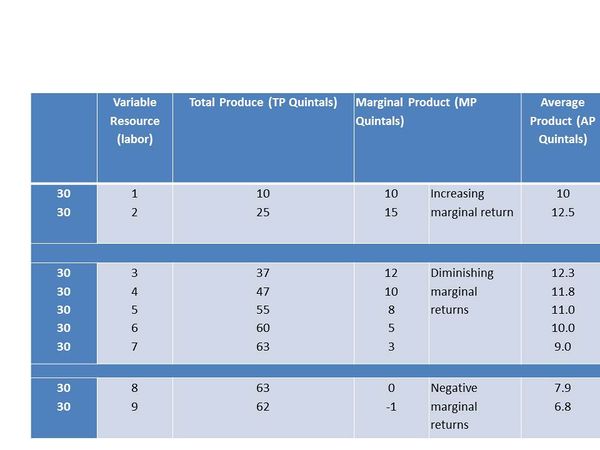 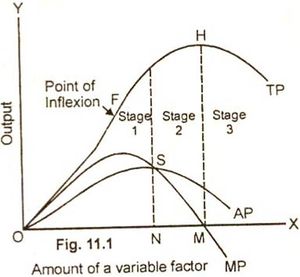 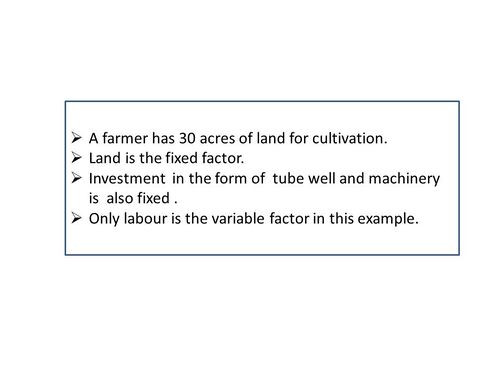 This law has THREE stages

s This is the most important stage in the production function. In stage 2, the total production continues to increase at a diminishing rate until it reaches its maximum point where the 2nd stage ends. In this stage both the marginal product (MP) and average product of the variable factor are diminishing but are positive. When TP reaches the maximum, MP is zero.MP intersects the X axis in this stage.

As more and more variable factors are used on fixed factor, marginal and average product begins to decrease. Factors of production are indivisible. Economically this is the most viable area of production.

In the 3rd stage, the TP decreases. The TP, curve slopes downward (From point H onward). The MP curve falls to zero at point L2 and then is negative. When we increases the labour even after MP becomes zero, then MP becomes negative and it goes below the X axis.This is the most unviable region. In our table from 8th unit onwards, this stage starts.

Any sensible producer will stop the production in the second stage where AP and MP begins to decrease, but MP has not become negative.The producer will employ the variable factor (say labor) up to the point where the marginal product of the labor equals to the wage rate.

2. Imagine now that you are going to clean your messy bedroom. The first hour of cleaning will make the most difference, the second hour should make less difference than the first hour, and eventually, if you continue cleaning your room, your extra time spent cleaning won’t make much difference at all because your room will already be clean.

→ This law is based on short production function.

→The gist of law is that if quantity of variable factors is increased keeping constant, other factors, eventually AP and MP will decline.

→ This law is applicable in all industries, but more In agriculture.

→ Third stage is unfeasible because MP is negative, so no meaning in paying additional wages to labours.