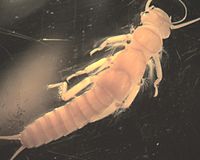 The occiput of this stonefly has no ridge or line of spinules, and the postocular consists of a few thin setae rather than several thick setae. The pronotum has only a few thin setae at the corners, which may be faint and difficult to see. Also, the eyes are set rather far forward on the head , making it quite distinctive from other genera we normally find. The stout abdomen and overall body shape of Hansonoperla closely resembles that of the family Chloroperlidae, but don't let the resemblance fool you- Hansonoperla is a perlid and therefore has gills on its thoracic segments; Chloroperlidae does not.

Images of the occiput, the postocular fringe, the pronotum, and the head.