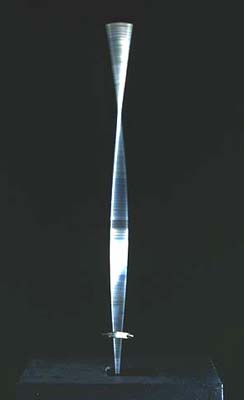 "Naum Gabo’s Kinetic Construction (standing wave) is created out of metal, painted wood and an electrical mechanism. The object itself is a 616 x 241 x 190mm sculpture. In the aftermath of the Russian Revolution, when Gabo’s work was made, materials were hard to come by. 'It was the height of civil war, hunger and disorder in Russia. To find any part of machinery was next to impossible. The Kinetic Construction was originally made to demonstrate the principles of kinetics to his students. A strip of metal is made to oscillate so that a standing wave is set up. This movement in real time creates the illusion of volumetric space. This work was made in Moscow in the winter of 1919-20 and was first exhibited in the open-air exhibition in the Tverskoi Boulevard there in August 1920 of works by Gabo, Pevsner and several younger artists arranged to coincide with the publication of the Realistic Manifesto.

Gabo was particularly interesting in working with volume, time, and space; he was always going on about the importance of controlling space in a sculpture. The standing waves had attracted his attention since his student days, in particular the fact that when you look at a standing wave, the image becomes three-dimensional. In order to show what he meant by calling for the introduction of kinetic rhythms into a constructed sculpture, he chose that standing wave as a good illustration of the idea. Therefore he decided to construct a standing wave which would be vibrating on one fixed point and rigid enough to be indeed a "standing wave". After a lot of experimenting he arranged the bar in such a way that at the base of it were two separate springs which would touch the spring on which the iron bar was fixed. Gabo arranged the springs in such a way that together they would produce a rhythmic standing wave, co-ordinating each other's vibration.Of course a project as large and as different as the standing wave would have some problems. He had to change many springs. He had to choose the length, strength, and elasticity of each one; He had to attach a kind of a brake to the main spring on which the bar was which would regulate the primary movement of the bar. He also had to balance out the steel rod so that the wave would be staying in the same dimensions and not jump out and divide itself into two waves. He solved the problem by fastening to the rod two balancing gadgets, one at the bottom of the rod and one at the top. At the bottom Gabo made a ring, fixed into a particular point at the base of the rod, which produced the beginning of the wave. At the top of the rod, two small triangular pieces of plastic regulated the height of the wave. Later on, by choosing a stronger steel rod, this last arrangement proved to be unnecessary'. Something Gabo really understood was the concept of trial and error which is and important skill to any artist. Kinetic Construction “Standing Wave” was the earliest of Gabo's experiments with motion in sculpture and one of the first true kinetic sculptures. Gabo did continue his experiments."