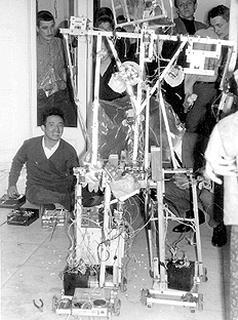 In 1964 Nam June Paik then 32 years old decided to visit New York. What originally was a 6 month visit turned out to be permanent stay.This began an extraordinary span of creativity in which he created K-456 a robot made out of various bits of metal, hinges, wires, speakers and other various things.The robot was designed to interact with people, mainly used in shows and on the street interacting with people.Nam June Paik and Charlotte Moorman decided to travel Europe in the summer of 1965 performing in various shows in Frankfurt, Cologne, Paris, Reykjavik and at the Galarie Parnass with K-456.The K-456 was originally constructed in Japan with the assistance of engineer Shuya Abe. The robot is a 20 channel radio controlled robot that can walk, talk, wave its arms, and excrete beans.In 1982 during the Paik retrospective exhibition at the Whitney exhibition, K-456 was struck by a taxi-cab. This event of course was staged and reported on television, Paik while viewing the video tape said "this is the first 21st century disaster". Nam June Paik has always been fascinated with antiques be it antique scrolls or antique Buddha's.Other works of art from Nam June Piak include "The Grandmother" a robot fashioned out of 7 vintage television cabinets and one vintage radio cabinet refitted with 8 new colour televisions, six 7" Quasar sets and 10" Quasar sets.Another one of his artworks is "The Grandfather" which is basically the same as "The Grandmother" but made out of 9 vintage television cabinets, and one vintage radio cabinet refitted with 11 new television sets, one 4" Sony set, seven 7" Quasar sets and 3 10" colour Quasar sets.He also built "The Mother, Father, Aunt, Uncle, Monument and passage.