This is even better than the last one baby! The late great Al "The Bear" Hite - Fried Hockey Boogie

This is how you feel after solving a programming problem - really, it's better than a MacDonald's (tm) hamburger. 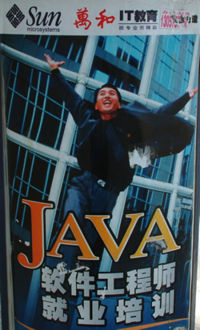 Students will find this unit easier if they have some previous experience with html, css and/or JavaScript. Coding requires self-discipline and patience in finding errors (debugging). Students can learn to be self-sufficient and treat difficulties as challenges.

Computers can be thought of as a huge collection of switches which can be on or off (in any one of two states). All the information presented by a computer is really stored in this form, known as binary machine code.

The binary number system is often used to describe the computer at this level.

This is tedious for humans to work with and they tend to make lots of mistakes when trying to do so. The first step for computer engineers was to make codes which could stand for binary instructions thus ADD might correspond to the code for adding two numbers together.

This language is also known as Assembly Language and it is still not very easy to handle so the next step was the development of High Level Languages like Java. One HLL statement usually translates into many machine code statements, you might see something like:

An important result of this, from our point of view, is that computers do not understand anything that is not written according to the rules (syntax) of the Java language so the following will all cause an error of some kind:

What it all means and see the Applet in action. You can also cut and paste the source code from here if you are not using BlueJ or do not wish to install the appletsimple template.

Explanation of the PressMe Applet code 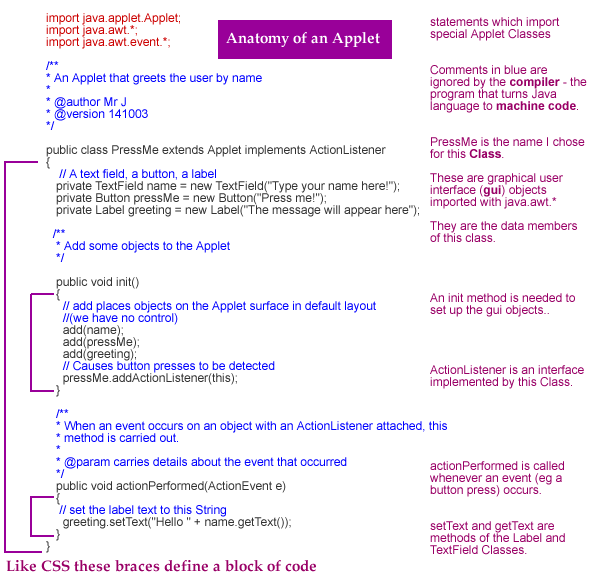 Anything inside quotes "here is a literal" is literal - it will appear exactly as shown. You can include spaces. So you can change:

and it will still work.

Don't leave off the semi-colon that marks the end of the line(s) though.

If you want to add more TextFields, Buttons or Labels to the GUI you can. You must add a new data member to define your new object:

and you must also add it in the init method:

and if it is a Button you must also add the actionListener:

Notice: There are rules for naming data members:

Notice that you don't have any way to know which button was pressed (yet).

Changing the properties of objects

One of the properties of TextField is the foreground colour; we can change that using a method called setForeground(Color), the colors are defined by another Class Color:

Add the above line to the init method of our Class PressMe.