From WikiEducator
< Introduction to Research Methods In Psychology‎ | Theories and Measurement
Jump to: navigation, search 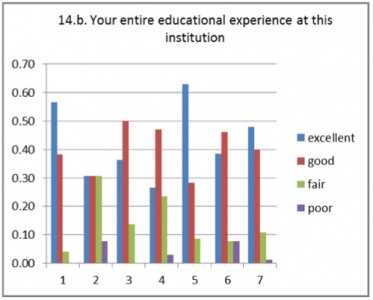 Exactly how the measurement is carried out depends on the type of variable involved in the research study. Different types are measured differently. To measure the time taken to respond to a stimulus, you might use a stop watch. Stop watches are of no use, of course, when it comes to measuring someone's attitude towards a political candidate. A rating scale is more appropriate in this case (with labels like "very favorable," "somewhat favorable," etc.). For a variable such as "favourite color," you can simply note the colour-word (like "red") that the subject offers.

Although procedures for measurement differ in many ways, they can be classified using a few fundamental categories. In a given category, all of the procedures share some properties that are important for you to know about. The categories are called "scale types," or just "scales," and are briefly described in this section. As an organizing principle, you should know that measurements can be grouped into four scales, from simplest to more sophisticated: Nominal, Ordinal, Interval, and Ratio. Each scale includes the characteristics of hte preceding scale plus one additional quality. Let's explore each scale now.

When measuring using a nominal scale, one simply names or categorizes responses. The values assigned to variables have no inherent numerical magnitude: they are simply descriptive names. Gender, handedness, favourite colour, and religion are examples of variables measured on a nominal scale. The essential point about nominal scales is that they do not imply any ordering among the responses. For example, when classifying people according to their favourite colour, there is no sense in which green is placed "ahead of" blue. Responses are merely categorized. Nominal scales embody the lowest level of measurement.

A researcher wishing to measure consumers' satisfaction with their microwave ovens might ask them to specify their feelings as either "very dissatisfied," "somewhat dissatisfied," "somewhat satisfied," or "very satisfied." The items in this scale are ordered, ranging from least to most satisfied. Scales like this are called "Likert scales" and they are widely used in many types of research. This is what distinguishes ordinal from nominal scales. Unlike nominal scales, ordinal scales allow comparisons of the degree to which two individuals rate the variable. For example, our satisfaction ordering makes it meaningful to assert that one person is more satisfied than another with their microwave ovens. Such an assertion reflects the first person's use of a verbal label that comes later in the list than the label chosen by the second person.

For more information you may wish to read the article "Likert scales: How to (ab)use them" by Jamieson (2004).

Interval scales are not perfect, however. In particular, they do not have a true zero point even if one of the scaled values happens to carry the name "zero." The Fahrenheit scale illustrates the issue. Zero degrees Fahrenheit does not represent the complete absence of temperature (the absence of any molecular kinetic energy). In reality, the label "zero" is applied to its temperature for quite accidental reasons connected to the history of temperature measurement. Since an interval scale has no true zero point, it does not make sense to compute ratios of temperatures. For example, there is no sense in which the ratio of 40 to 20 degrees Fahrenheit is the same as the ratio of 100 to 50 degrees; no interesting physical property is preserved across the two ratios. After all, if the "zero" label were applied at the temperature that Fahrenheit happens to label as 10 degrees, the two ratios would instead be 30 to 10 and 90 to 40, no longer the same! For this reason, it does not make sense to say that 80 degrees is "twice as hot" as 40 degrees. Such a claim would depend on an arbitrary decision about where to "start" the temperature scale, namely, what temperature to call zero (whereas the claim is intended to make a more fundamental assertion about the underlying physical reality).

The ratio scale of measurement is the most informative scale. It is an interval scale with the additional property that its zero position indicates the absence of the quantity being measured. You can think of a ratio scale as the three earlier scales rolled up in one. Like a nominal scale, it provides a name or category for each object (the numbers serve as labels). Like an ordinal scale, the objects are ordered (in terms of the ordering of the numbers). Like an interval scale, the same difference at two places on the scale has the same meaning. However, in addition, the same ratio at two places on the scale also carries the same meaning.

Another example of a ratio scale is the amount of money you have in your pocket right now (25 cents, 50 cents, etc.). Money is measured on a ratio scale because, in addition to having the properties of an interval scale, it has a true zero point: if you have zero money, this actually implies the absence of money. Since money has a true zero point, it makes sense to say that someone with 50 cents has twice as much money as someone with 25 cents.

Summary of the Levels of Measurement