What is demand in economics?

Conceptually, demand is nothing but consumer’s readiness to satisfy desire by paying for goods or services. A desire accompanied by ability and willingness to pay makes a real or effective demand.

Demand is one of the most important decision making variables in present globalised, liberlised and privatized economy. Under such type of an economy consumers and producers have wide choice. There is full freedom to both that is buyers and sellers in the market. Therefore Demand reflects the size and pattern of the market. The future of a producer is depends upon the well analysed consumer’s demand. Even the firm dose not want to make profit as such but want to devote for ‘customer services’ or ‘social responsibilities’. That is also not possible without evaluating the consumer’s tastes, preferences, choice etc. All these things are directly built into the economic concept of demand.

The survival and the growth of any business enterprise depends upon the proper analysis of demand for its product in the market. Demand analysis has profound significance to management for day today functioning and expansion of the business. Thus the short term and long term decisions of the management are depend upon the trends in demand for the product. Any rise or fall in demand for the product has to be to find out reasons and revised production plans, technology or change in advertisement, packging, quality etc.

Law of demand states that whenever price of a product increases then the demand for that product decreases and vice versa provided other things remain constant. Here these other things are Income of the individual, Price of related goods, Tastes and preferences, Population, Advertisement etc. While studying the law of demand the direct relationship between price and demand is studied. This is because under the economic theory price of a product is considered as the main determinant of demand in the short run period.

As per the law of demand, demand is function of price provided other things remain constant

Where a and b are constants. 'a' is intercept and 'b' quantifies the relationship between Dx and Px. The demand price relationship can be both linear and non-linear. The relation ship between demand and the price can also be expressed as follows:

Here Qdx indicates the change in the quantity of demand if the price changes and as per the law of demand an inverse or opposite relationship between price and quantity demanded of a commodity is assumed.In simple words, if the price of a product is high then its demand will be low and vice versa. This relationship is also exhibited in the digrammatic representation of the demand curve. To state more clearly, if we are digrammatically representing demand by taking demand on the X axis and the price of the product on the Y axis then we always get a demand curve sloping downwards from the left to right indicating the price demand relationship as expressed by the law of demand.

Demand curve is the graphical representation of the demand schedule. Demand curve is obtained by plotting a demand schedule on a graph. As discussed earlier, demand curve slopes downward from left to right. It has a negative slope. It shows there is inverse relationship between price and quantity demanded of a commodity.

Again, as discussed earlier, Demand curve can be both Linear or Non-linear - If the Demand Curve is Non-linear then the eaquation of Demand is as follows:

If Demand Curve is Linear, then the equation of Demand curve is taken as follows:

The digrammatic representation of the Demand Curve can be as follows: 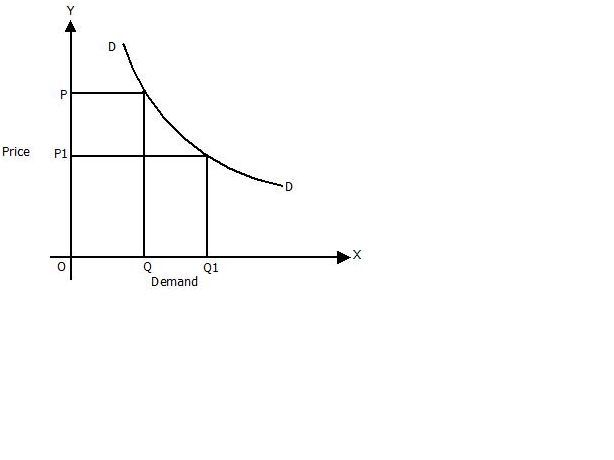 Expansion and Contraction of Demand

When we say the variation in demand takes place in the market for a particular product or service means this phenomenon occurs ( that is rise or fall in demand) only because of change in its price.Here consumer remains on the same demand curve. He shifting up or down on the same demand curve as shown in dig. Therefore law of demand is concerned with the phenomenon that is VARIATION IN DEMAND which is accompanied by Rise and Fall in price, or known as expansion and contraction in demand.

When we say the change in demand takes place in the market for a particular product or service means due change in its other factors like income, taste, preferences etc and not because of its price. Thus due to rise or fall in income of a consumer or change in preferences, taste etc there is rise or fall in demand for a commodity or services. Here quantity demanded of a commodity is more or less at same or higher or lower price. Here consumer shift on higher demand curve to the right or lower demand curve to the left. This phenomenon is known as Change in Demand which is accompanied by increase and decrease in demand.

Why does the demand curve slope downward from Left to Right?

The reasons behind the law of demand and the shape of demand curve are following.

Other Determinants of Demand

Along with price there are many other factors which also influence the demand for a commodity. They are prices of its close substitutes, income of consumer, wealth, size of population, fashion, taste of consumer etc.

Px = Price of a commodity

Y = Income of a consumer and Engle curves

W = Wealth of a consumer

A = Advertisement and Publicity

T = Taste and Preferences of a consumer

And there can be many more similar factors that may impact demand. All the above factors play very important role in the determining demand for a commodity or service if all the above stated factors are taken as variable. Here, it is important to understand that Law of Demand assumes partial equilibrium which means that if other things remain constant then whenever the price of a commodity changes then the demand for that commodity changes in the opposite direction.

If on the other hand, general equilibrium analysis is used in explaining the demand then impact of some of these other factors can be explained as follows: