"There is no alphabet/letter which is not a mantra and there is no plant which is not a herb." This adage unfolds the depth of Indian Culture. The sounds, touches, colours, tastes, and smells which go into each and every ceremony and celebration, festival and feast need to be captured and highlighted here. As the initiative for this page has emerged from KARNATAKA, the cultural Flag of the State which is of silk, consisting of Yellow/Haldi and Vermilion/Kumkuma colours held by the Goddess Sri Bhuvaneshwari will be hoisted soon here.

It is the sacred duty of every citizen of India to abide by the mandates of the Constitution of the nation. It urges the citizens to preserve and propagate its composite heritage. Hinduism is the predominant and the most ancient religion of the land. Its a country where many religions have coexisted since they were accepted and followed by the people of the land. There are, for example Buddhism, Jainism, Sikhism, Christianity, and Islam. The important religious national festivals in India include:

For want of another illustration which every child with Indian cultural background can grasp easily, the following picture is provided. It is all-inclusive and all-encompassing. 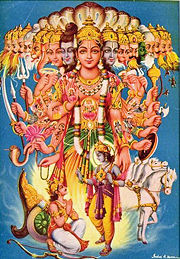 This is the day dedicated to Sage Veda Vyasa. This year it falls on the 18th Friday , July 2008. Puja is offered to the Guru by the disciples according to the Parampara on this day across the country and wherever the lineage is alive and active.

All spiritual traditions are located in the Sri Chakra 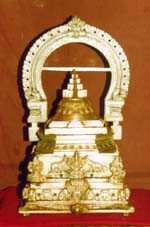 The Lotus Feet and the Sandals of Guru are equally sacred for a disciple and they worshipped as spiritual symbols of the Divine. The fifth generation disciples of Sri Bhaskararaya like[[1]]follow the discipline of Sri Chakra Puja even to the present day. The Vedic Centres of Learning, like the one at Sringeri, established by Adi Sankara also maintain the Sri Chakra tradition. 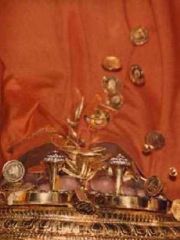 The birthday of Guru Nanak Dev, the founder of the Sikh religion is celebrated on this day. People take out processions, sing hymns, read the holy book, participate in karseva, prepare food and distribute prasad. Karseva is unique to Sikh religion. Kar means hands and seva means work (with out expecting any renumeration). Followers of sikhism do all the work related to the sikh temple - the Gurudwara - which virtually means the gate to the guru.

Durga Pooja, Lakshmi Pooja and Saraswati Pooja together are called Navaratri Pooja consisting 9days. 10th day is also called Vidyarambha. The annual celebrations of Sharannavaratri at Sringeri are detailed at: