So far we have been discussing about the change in demand as a result of a change in the price of the good . We found the consumer’s demand varying differently with respect to each product. A further insight on this can be derived by studying what happens when the consumer has a change in his income. When the consumer’s income increases, assuming that prices remain constant, The capacity of the consumer to purchase that good increases. We say that the real income of the consumer has increased. When the real income increases does the consumer buy more of this commodity. In reality the consumer does not buy more of all the goods. In some cases the demand increases, in some cases it decreases and in still other cases it remains the same. The measure of income elasticity of demand provides us the answer to these questions. It helps us understand the nature of the commodity and how it is perceived by the consumer.

In mathematical terms it can be represented as: Ey =(∆q/∆y)(y/q) 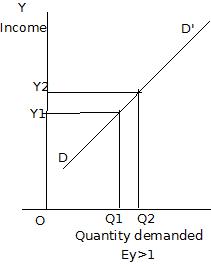 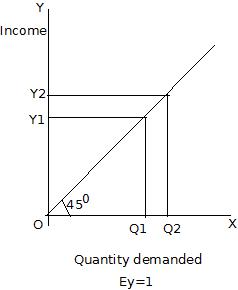 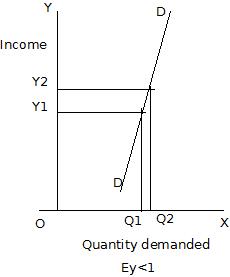 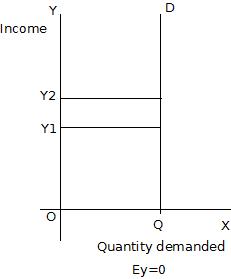 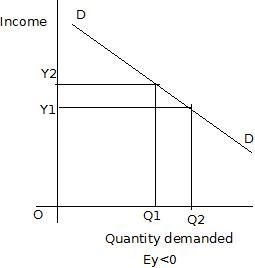 
Inferior goods Inferior goods have negative income elasticity of demand.If with an increase in the income there is a decrease in the demand for the good, we refers to this as negative income elasticity of demand(Ey<0). When the income of the consumer increases he finds it below his dignity to purchase some goods and hence when his income increases he prefers to consume less of the goods he used to purchase earlier or opts for some other good which according to him has a better position and are consumed by people belonging to the higher income group.


Note income elasticity of demand varies across product range.Further over a longrun period with changes in the taste and preference and consumer’s perception of commodities elasticity of demand is likely to change.A product which was a luxury at one point of time becomes a necessity today. Consider the market for foreign travel.A few decades ago,long distance foreign travel was regarded as a luxury. Now as real price levels have come down and incomes have grown, a large number of people are travelling to different places for a short or long period.

a.Classify the commodities in your own consumption basket as normal goods,luxury goods and inferior goods.

b.Are the commodities mentioned below normal goods ,luxury goods or inferior goods ? Give reason for your answer.

The following table gives the quantity of a commodity X that a family would purchase at various income levels.
i) Find the income elasticity of demand of this family for Commodity X for various successive levels of this family's income .
ii)Over what range of income is Commodity X a Luxury,a necessity,or an inferior good for this family?