Isoquant is also called as equal product curve or production indifference curve or constant product curve. Isoquant indicates various combinations of two factors of production which give the same level of output per unit of time. The significance of factors of productive resources is that, any two factors are substitutable e.g. labour is substitutable for capital and vice versa. No two factors are perfect substitutes. This indicates that one factor can be used a little more and other factor a little less, without changing the level of output.

It is a graphical representation of various combinations of inputs say Labour(L) and capital (K) which give an equal level of output per unit of time. Output produced by different combinations of L and K is say, Q, then Q=f (L, K). Just as we demonstrate the MRSxy in respect of indifference curves through hypothetical data, we demonstrate the Marginal Rate of Technical Substitution of factor L for K (MRTS L,K )

The shape of Isoquant

In this section we examine the characteristics of isoquants, define the economic region of production and consider the special cases where the commodities can only be produced with least cost factor combination.

We can see that the shape of isoquant plays an important a role in the production theory as the shape of indifference curve in the consumption theory. Iso quant map shows all the possible combinations of labour and capital that can produce different levels of output. The iso quant closer to the origin indicates a lower level of output. The slope of iso quant is indicated as [math]\frac{K}{L}[/math]=MRSLk=[math]\frac{MPL}{MPk}[/math] 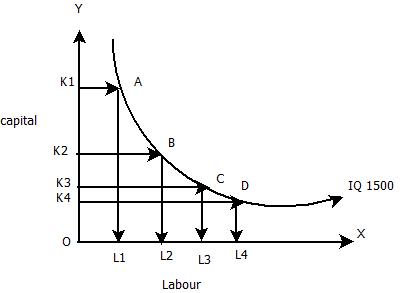 Isoquants, abbreviated as IQs, possess the same properties as those of the indifference curves. For the convenience of the students, we can state them as follows. 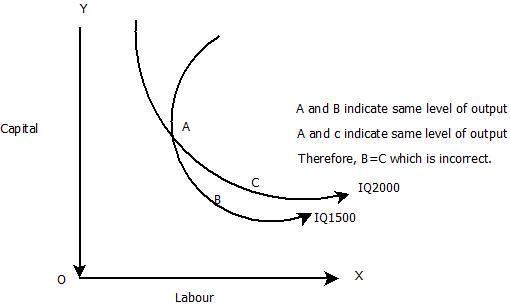 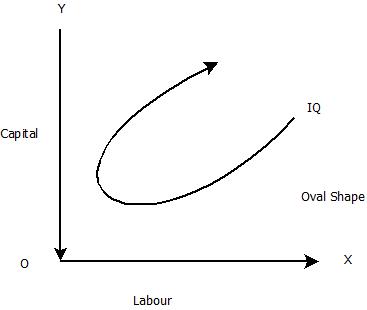 Isocost curve is the locus traced out by various combinations of L and K, each of which costs the producer the same amount of money (C ) Differentiating equation with respect to L, we have dK/dL = -w/r This gives the slope of the producer’s budget line (isocost curve). Iso cost line shows various combinations of labour and capital that the firm can buy for a given factor prices. The slope of iso cost line = PL/Pk. In this equation , PL is the price of labour and Pk is the price of capital. The slope of iso cost line indicates the ratio of the factor prices. A set of isocost lines can be drawn for different levels of factor prices, or different sums of money. The iso cost line will shift to the right when money spent on factors increases or firm could buy more as the factor prices are given.

With the change in the factor prices the slope of iso cost lien will change. If the price of labour falls the firm could buy more of labour and the line will shift away from the origin. The slope depends on the prices of factors of production and the amount of money which the firm spends on the factors. When the amount of money spent by the firm changes, the isocost line may shift but its slope remains the same. A change in factor price makes changes in the slope of isocost lines as shown in the figure. 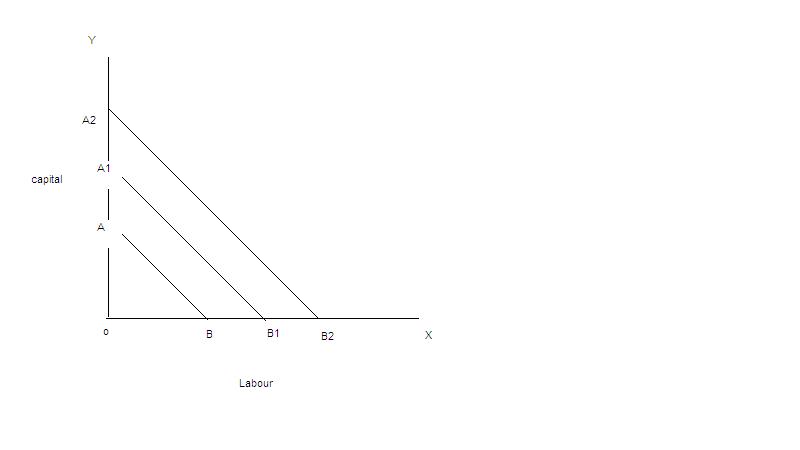 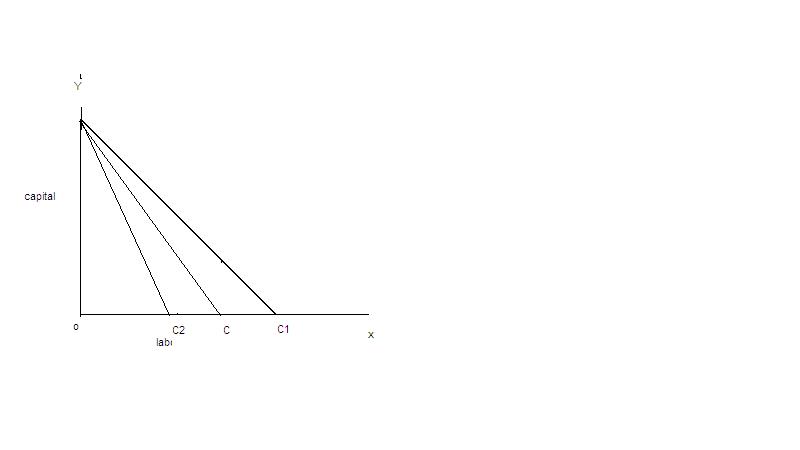 The firm can achieve maximum profits by choosing that combination of factors which will cost it the least. The choice is based on the prices of factors of production at a particular time. The firm can maximize its profits either by maximizing the level of output for a given cost or by minimizing the cost of producing a given output. In both cases the factors will have to be employed in optimal combination at which the cost of production will be minimum. The least cost factor combination can be determined by imposing the isoquant map on isocost line. The point of tangency between the isocost and an isoquant is an important but not a necessary condition for producer’s equilibrium. The essential condition is that the slope of the isocost line must equal the slope of the isoquant. Thus at a point of equilibrium marginal physical productivities of the two factors must be equal the ratio of their prices. The marginal physical product per rupee of one factor must be equal to tht of the other factor. And isoquant must be convex to the origin. The marginal rate of technical substitution of labour for capital must be diminishing at the point of equilibrium. 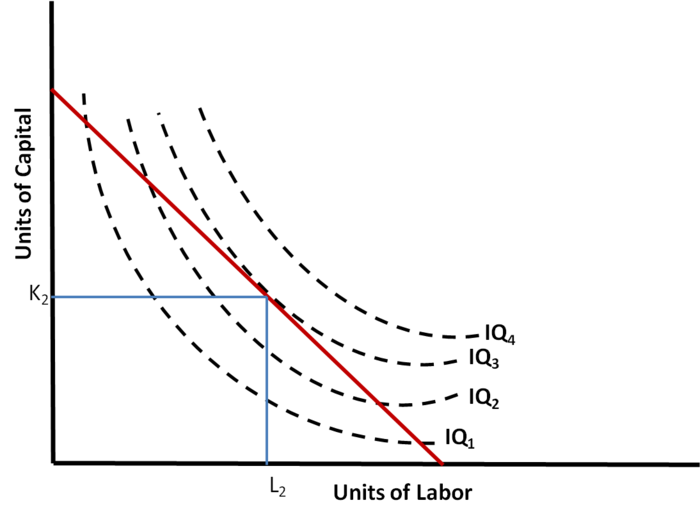 The Economic region of production

The firm would not operate on the positively sloped portion of an isoquant because it could produce the same level of quantity with less capital and labour. Economic region of Production:

Ridge lines joins points on the various isoquants where the isoquants have zero slope (and thus zero MRTSlk) .

An isoquant shows the various combination of two inputs that can be used to produce a specific level of output. From the isoquant map, we can generate the total product curve of each input by holding the quantity of the other input constant.

Isoquants are negatively sloped in the economically relevant range, convex to the origin and do not intersect. The absolute value of the slope of Isoquant is called the Marginal Rate of Technical Substitution. This equals the ratio of marginal productivity of two inputs.

With right angled or L shaped, isoquant , inputs can only be combined in fixed proportion in production.