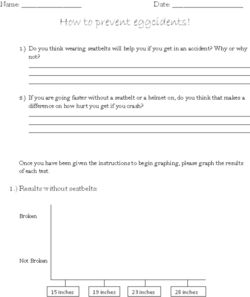 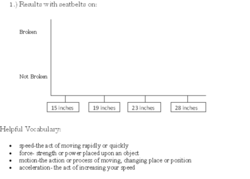 Pre Lab Setup Students gather together and measure out different heights on the peg board, label the heights and insert the dowels from which to balance the boards. For the pre lab the teacher should build a small model car, see materials for car above, as well as Figures 1-3. Make sure that the ramp is made and bricks are placed at the end of the ramp. Now you are ready to prevent eggcidents!

2.Testing Without a seatbelt

3.Testing With a seatbelt 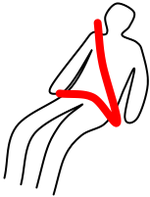 We are having students measure out the different heights on the peg board. Students work with rulers and labels to make sure that their experiment is carried out thoroughly.

We also will be discussing incline planes. The inclined plane is one of the original six simple machines; as the name suggests, it is a flat surface whose endpoints are at different heights. By moving an object up an inclined plane rather than completely vertical, the amount of force required is reduced, at the expense of increasing the distance the object must travel. The mechanical advantage of an inclined plane is the ratio of the length of the sloped surface to the height it spans; this may also be expressed as the cosecant of the angle between the plane and the horizontal. Note that due to the conservation of energy, the same amount of mechanical energy is required to lift a given object by a given distance, except for losses from friction, but the inclined plane allows the same work to be done with a smaller force exerted over a greater distance. [2] Helpful Safety Site: CPSafety [[3]]

When the slope angle (θ) is zero, sinθ is also zero so the body does not move.Source for Inclined Plane: [[4]] 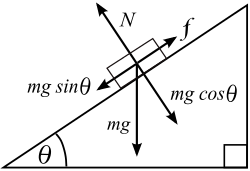 Figure 10. Key: N = Normal force that is perpendicular to the plane m = Mass of object g = Acceleration due to gravity θ (theta) = Angle of elevation of the plane, measured from the horizontal f = frictional force of the inclined plane

Sir Isaac Newton in his work Philosophiæ Naturalis Principia Mathematica, first published on July 5, 1687. In this publication Newton expressed the laws of motion, which are three physical laws that relate directly to the motion of the body. Newton's three physical laws relate directly to our experiment as we worked to explain the science behind an inclined plane and the increased acceleration of the car due to the height of the inclined plane.

Newton's First Law- often referred to as the "Law of Inertia," this law expresses that the movement of an object cannot be changed unless acted upon by an outside force. Without anything pushing or preventing the acceleration of the car, there will be movement without a change in velocity.

Newton's Second Law- this law is often stated as, "Force equals mass times acceleration (F = ma)." When the mass is constant, "the net force on an object is equal to the mass of the object multiplied by its acceleration."

Newton's Third Law- can be summed up with the well-known phrase, "To every action there is an equal and opposite reaction." If you imagine our car driving along at a constant speed and then suddenly it hits the car driving along the opposite side of the road first you will notice the force that our car exerts on the car that it hits (causing a great big crash and maybe even a broken egg!). However, the car that was hit is not the only object that had force exerted on it, it also simultaneously released force of equal magnitude against our car.

We believe that if we were to use this lesson again and had a greater amount of time to teach our students we would expand on our lesson using Sir Isaac Newton's first three laws of motion. All of the information for this section came from: [[5]] which is very informative and helpful in explaining Newton's science!

Here are some great books you might want to check out for your classroom! 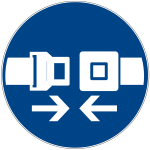 S1-2:19 Students demonstrate their understanding of Motion by… ∙ Investigating and describing how objects move in different ways

M2: 25 Organizes and displays data using diagrams, models, tally charts, or tables to answer questions related to the data, to analyze the data to formulate conclusions.

HE2: Core Concepts Students will show an understanding of health promotion and disease prevention concepts and compare behaviors that are safe to those that are risky or harmful (e.g., bicycle and other sport activities, riding in vehicles, handling weapons, fire, appropriate/inappropriate touch).

This experiment may have some difficulty if the eggs for some reason do not break. If the seatbelt puts pressure on the egg and causes it to smash when it goes down the ramp this would lead students to believe that seatbelts can injure a person rather then help them. To make sure that our eggs smashed without a seatbelt and were safe with one on, we tested the eggs several times in the car that we built. We also tested all of the heights and pre-graphed our experiment to make sure that particular levels caused a greater result. Although there are pitfalls to this experiment, they can easily be avoided through preparation.

If you have time to expand on this lesson in your classroom there are many fun and interesting elements that can be pulled into this lesson plan. For example, students can build their own model cars using the parts that we have listed under our materials. As long as there is supervision to use the different tools and parts of the car, this is a safe and fun activity. If students fashion their own cars it establishes a personal connection to the car that they will see crashing down the inclined plane. Also, students could decorate the eggs that they send down the inclined plane. This artistic connection to the experiment allows students to channel their creative energy into the lesson. We will then read to the students Safe Sally Seat Belt and the Magic Click (Need to Know Books) and Staying Safe in the Car (Safety First)

This experiment worked well! The students were excited to see the eggs crashing and smashing onto the floor. Also, working on the graphs kept them engaged and made a strong science connection as scientists use graphs to record their data. Throughout the experiment students made verbal predictions about whether or not the egg was going to crack as the height of the incline increased. One student made an excellent observation that our cars had two different seats so this may have changed the egg's reaction to the crash. After each lesson we reinforced the learning by discussing seat belt safety and the importance of wearing a helmet when bike riding or sledding. The students also loved the mess and had no problem staying away from the raw egg.