The decorative arts have meaning too, primarily in the functionality of the art works themselves, but also in the style and decorations afforded them. A goblet from the 17th century has an aesthetic meaning in its organic form, in its function as a means to hold and dispense liquid, and a particular historical meaning in the way it is embellished with diamond point engravings that depict the flow of the river Rhine (click ‘Fullscreen’ at the bottom of the image, and use the '+' tool to see the goblet in detail). The goblet’s detailed map of the Rhine gives it specific context: the historical, religious or social issues surrounding a work of art. 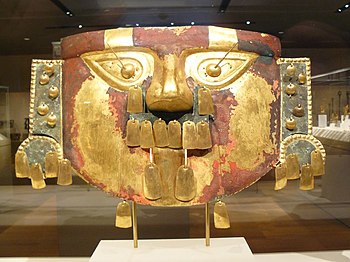 Funerary mask, 10th–11th century Peru, Sicán (Lambayeque), gold, copper overlays, cinnabar, 29.2 x 49.5 cm, The Metropolitan Museum of Art, New York
These issues not only influence the way the viewer finds meaning in particular works of art but also how the artists themselves create them. For instance, this hammered gold mask from Peru’s Sican culture is simple and symmetrical in form and striking in its visage.

To view James Rosenquist’s painting F-111 is to be confronted with a huge image of a fighter jet overlaid with images from popular culture, all in bright colors and seemingly without connection.

But when we see the work in the context of American experience in the 1960’s we realize the two-pronged visual comment Rosenquist is making about war and consumerism; what he termed “a lack of ethical responsibility”.[1] In the artist’s hands the two ideas literally overlap each other: the salon hair dryer and diver’s bubbles mimic the mushroom cloud rising behind the opened umbrella (which is another formal link to the nuclear bomb blast behind it). The painting is at such a large scale that viewers are dwarfed by its overpowering presence.