New Zealand in the post-war period

The Demise of Great Britain as a global power. 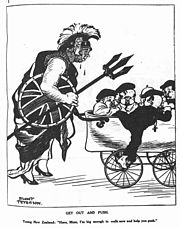 The beginnings of the Cold War between U.S.A. and the U.S.S.R.

Brought about by a reliance on a single (European) market for most of their products. New Zealand main exports were primary products in the 1940s and 1950s.

Japanese Aggression in the Pacific

The psychological damage to the nation caused by Japanese aggression in the Pacific. These acts of aggression included:

As a result of U.S. servicemen being stationed in New Zealand. 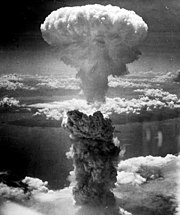 The bombing of Nagasaki 1945

The emergence of nuclear weapons as a major factor in global relations.

After the bombing of the Hiroshima and Nagasaki by the United States the world saw the impact and scale of mass destruction a single nuclear bomb can cause. This caused outburst of fears from many countries and was received as a very controversial way to end the war. The sheer power of nuclear bombs was enough to stimulate many countries into developing nuclear weapons. Among these countries were United King, France, the Soviet Union and the People's Republic of China. Countries who posses nuclear weapons quickly rose as very influential powers in their region and caused many international tensions. New Zealand tested Nuclear weapons along with the Americans and the British in Australia. They had not guinea pigs but sacrificial lambs wearing different protective clothing to see if the protective clothing could help against the impact of the nuclear tests.