From WikiEducator
< History‎ | Black Civil Rights in the USA
Jump to: navigation, search 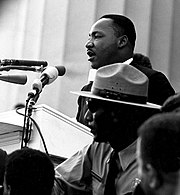 "Dr. King had the power, the ability and the capacity to transform those steps on the Lincoln Memorial into a monumental area that will forever be recognized . By speaking the way he did, he educated, he inspired, he informed not just the people there, but people throughout America and unborn generations."

I Have a Dream by Martin Luther King Jr.

It was a landmark piece of legislation in the United States that outlawed racial segregation in schools, public places, and employment.

It involved the Federal government taking control over matters which many states believed were their own concern.

Three reasons why it passed

"a tribute to the disciplined, wise restraint and majestic courage of gallant Negro and white persons of goodwill who have followed a non-violent cause"