Tried at least once and worked well. We received many compliments about this lesson and encountered few problems.

Students will be learning how to classify animals. Students will have to decide where they think the animals should be placed in the following class categories: mammals, birds, reptiles, amphibians, fish, and insects. This game will challenge the students abilities to classify what they think is a mammal, bird, reptile, amphibian, fish or insect is, without any prior instruction on the topic. The idea of this game is to challenge the student’s prior knowledge of the subject and after it will be easier to target the areas of animal classification the students do not understand. This activity is a great way to start a unit or topic depending on how much time is allotted for this topic. Also, this activity is a fun and hands on way for students to begin to learn about this topic and will engaged the students in there learning through out the entire game.

The following link includes the clue cards that were used in our trial with students. File:Note Cards Animals.pdf 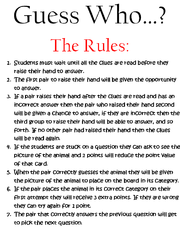 In this activity we will play a Jeopardy style game with the students that will test their knowledge about animals. Students will be read clue cards that describe animals and vary in difficulty. Once a team gets the right answer they will find the picture of that animal and attempt to put it under the correct classification on the board: fish, birds, mammals, reptiles, amphibians, and insects. After all of the clue cards are gone and the animals are on the board then the students will all work together to hang facts about each type of animal under the correct class on the board. After they are all on the board the teacher will go over the facts and ask the students to fix the incorrect ones and explain why they were incorrect.

There are few potential pitfalls to this activity. One pitfall that we encountered was simply not having enough time. Another pitfall was some of the animals were very difficult for the students, but this can be solved by providing extra clues. As long as you are consistent with the rules, have enough time, and are prepared this activity runs smoothly.

This activity has a stronger literature connection. The only math connection would be the students keeping track of and adding up their points during the game.

As a next step to this activity and a literature connection students will research an animal from the game in National Geographic's Encyclopedia of Animals by Karen McGhee and George McKay. Each student will use the book to research their animal, write down their findings, and present them to the class explaining their animal's habitat, eating habits, characteristics etc. This will expand on the few clues that were given to describe the animals in the game.

7.1.f. Use either deductive or inductive reasoning to explain observations and phenomena, or to predict answers to questions;

7.1.h. Identify problems, propose and implement solutions, and evaluate products and designs; and

7.1.i. Work individually and in teams to collect and share information and ideas.

S3-4.38 Students demonstrate their understanding of Classification of Organisms by describing and sorting plants and animals into groups based on structural similarities and differences (e.g., All pine, spruce and evergreen trees have similar leaf structures; Spiders have eight legs, and insects have six).

As a next steps, students will complete the activity under the literature connection. Also using the magnets it would be possible to do an activity about food chains and webs by arranging the magnets on the board according to who consumes whom. Students can be taught about energy transfer from one organism to another through this activity as well. The magnets are great to use for any activity about food chains and webs because they can easily be moved on the board.

In my opinion this activity was the best activity that we did this semester. It took a lot of planning but it was completely worth it to see the students so engaged and to get great compliments from the visiting teachers and our own professor. Children love competition so the students were very excited about the game. They were engaged the entire time from listening to the clues to putting the facts on the board at the end. If I had to change something, I would just want more time because we did not get through all of the clue cards in the small amount of time we had with each group. My advice to anyone doing this activity would be to stay consistent with the rules, because the students will call you out on it! Also, be prepared to give extra clues about some of the animals that are challenging such as the Lynx. Make sure that you remind the students to work with their teammates and that everyone speaks up. This activity also worked very well because we did not make it all about winning and losing. Putting the facts on the board at the end forced all the students to work together and most of them quickly forgot about who had won or lost. This activity is a lot of fun and the students really learn a lot about organisms and the categories into which they can be placed. It's hands on and really makes them think! I really loved watching them stand at the board talking with their partners debating whether a frog is an amphibian or a reptile and seeing their faces light up when they got it right. -Melissa Coughlin


This activity was fantastic! Not only did we get some complements from visiting teachers, but the students really liked our activities too. There was one student in the other group in our room and he kept trying to answer questions for the group that was doing our activity. The students really like the competitive aspect of our activity and it help keep them engaged throughout the entire game. In my opinion the clue cards were well dispersed in difficultly and I was surprised about how much the children knew about animals already. However, there were a few cards the students could not figure out, but I believe it is always good to challenge the students. The students seemed to have fun and leave with some new knowledge about classifying animals. In my opinion, the only pitfall in this activity is time. We actually had three different activities and we only were able get through two of them. The three activities we had planned were the Guess Who game, the fun facts about each of the 6 classes and we had skulls of different animals to show them. We played the game but weren’t able to finish it and we had the students put up facts about each of the different classes. Due to time constraints we did not have time to do the skulls with the students and I think the students would have found them interesting. My recommendation would allow enough time to play the entire game because the students learned a lot about the different kinds of animals as well as there class. Also, if I were teaching this section about classifying animals, I would have the students research specific animals and have them explain why the animal is classified that way. -Kristin Hagenbarth

The following sources were used of the clue cards and facts: