Figure 1: used to demonstrate the Scientific Method with this experiment 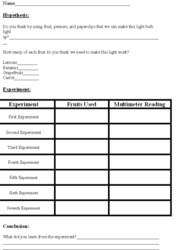 Conductors- A substance or medium that conducts heat, light, sound, or especially an electric charge.

Current- a flow of electric charge

Battery - An energy storage device made up of one or more electrolyte cells.

Circuit(s) - A conductor or a system of conductors through which electric current flows. Electrical Energy - The energy associated with electric charges and their movements. Electricity - A form of energy characterized by the presence and motion of elementary charged particles generated by friction, induction, or chemical change. Electron - A subatomic particle with a negative electric charge. Electrons form part of an atom and move around its nucleus.

Volt (V) - The volt is the International System of Units (SI) measure of electric potential or electromotive force. A potential of one volt appears across a resistance of one ohm when a current of one ampere flows through that resistance. Reduced to SI base units, 1 V = 1 kg times m2 times s-3 times A-1 (kilogram meter squared per second cubed per ampere). [1]

The students will make a battery using fruit to produce enough electricity to light a small LED light.

The lesson will begin with assessing the students’ knowledge of batteries by asking the following questions:

Then we will tell the students that we are going to be creating our own battery to make an LED bulb light up.

Gather materials and discuss with children whether or not they think that they will be able to get an LED bulb to light up or an incandescent bulb to light up with the above materials. Record their guess on the worksheet.

After lighting up the LED bulb have the following discussion with your students of why this experiment works.

What if the bulb doesn’t light? Try the following things:

Students use math by recording data, using tables as well as forming a hypothesis on how much fruit will be need to light the LED using the worksheet (Fig 1).

There are many other activities that you can connect to this. Some being, units on electricity, energy conservation, metals, and maybe even a unit on composting!

Fruit Salad De-Light went off almost flawlessly. The lesson was exciting, engaging and informative. Both students and teachers alike thought the lesson was very “cool” and they couldn’t believe that with just fruit we were able to light up a small LED light. The students contributed to the discussion and all the students were able to successfully complete the worksheet. The students asked questions and made good predictions as to how much fruit it would take actually light up the LED bulb. It was interesting to us that each time we did the experiment we needed a different amount of fruit to make it light up. This could have been because of many different factors. When working with children there are more opportunities for small mistakes to get in the way of the scientific method. For example, one group may have pushed their copper wire in a little deeper than another group and that could have caused a slight difference. We also ran into a slight problem when one of our LED bulbs was out. We continued to add more and more fruit and rechecked every wire connection to no avail, eventually we decided to try another light and once we switched bulbs we had success! Overall, this lesson was very successful and I would certainly do it again with another group of students.