What is Open Pedagogy? 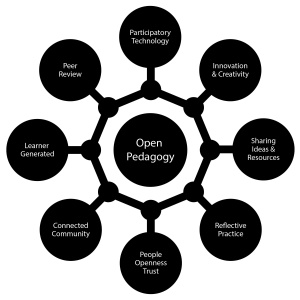 Open pedagogy is that set of teaching and learning practices only possible in the context of the free access and 4R (reuse, revise, remix, redistribute) permissions characteristic of open educational resources (Wiley, 2013).

Since this definition in 2013, David Wiley has added a fifth R - Retain - that is, make, own, and control -copies of openly licensed content. So what does this all mean? Essentially, teachers who use an open pedagogy use or create resources that can be freely modified and shared with others including their students. Such resources, would have 'open content licences' such as Creative Commons or a GNU General Public licence. More on this in the next module.

Teachers using an open pedagogy would also use open Web 2.0 technologies for facilitating learning, and encourage students to share their work openly. They would also tend to use open textbooks such as those in the Open Textbook library would be preferred over copyrighted textbooks.

However, developing 'openness' can be challenging. Teachers may be uncomfortable sharing their work in open platforms, fearing the quality is inadequate or that they will be judged or that others might 'steal' their ideas and resources. Open pedagogy does require a change in mindset to develop 'openness' and work within a specific way. Eight attributes considered by Bronwyn Hegarty (2015) to be associated with Open Pedagogy are shown in the image.