This activity has been practiced with children during an after school program and again with just the teachers during class time. The students seemed to really enjoy it when they participated.

Figure 1:Example of a lava lamp. 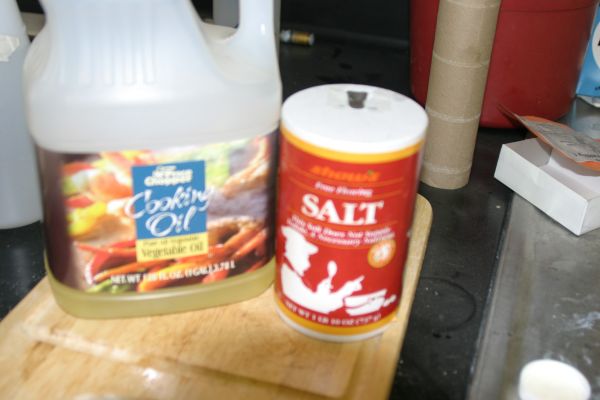 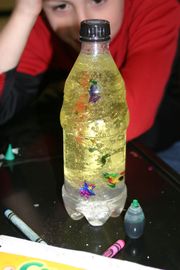 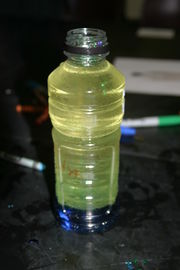 In this activity students will create their own, non-toxic, lava lamps. They will explore the idea of intermolecular polarity, basically that oil and water do not mix. They will also be able to explore an acid-base reaction between the water and an Alka Seltzer® tablet. The water and Alka Seltzer® react to create little bubbles of carbon-dioxide gas. The bubbles float to the top and when they pop the colored water travels back down to the base again and begins again. The students will use oil, water, food coloring, Alka Seltzer® and decorations if desired to simulate a lava lamp within a plastic soda bottle.

1. Ask students if they've ever mixed oil with water. If they have, ask them what they noticed happen. Explain to the students that today they will be making lava lamps by combining immiscible liquids. These are liquids that don't mix and will therefore settle in levels. Explain to students that they will settle based on the liquids' density.
2. Each student should be given a plastic bottle. The size doesn't matter, but we've found that 500 mL bottles work best.
3. Pour 3/4 vegetable oil into the bottle.
4. Pour almost 1/4 water into the bottle, but don't let the bottle overflow.
5. Allow for the substances to settle. This should only take a few minutes. Have students color on their handouts which substance is in the bottom and which substance rose to the top. Explain to students that the water is denser than the oil and that is why it settled on the bottom of the bottle.
6. Drop a few drops of food coloring into the bottle. This will allow for the reaction to been seen more easily. Ask students to explain what happened to the food coloring when that was dropped in as well. Did it settle in the oil or in the water? Did it spread out at all or stay in small drops?
7. Adding glitter to the bottle will also allow for the reaction to be better seen so if you would like to use this step, add it now.
8. Break up an Alka Seltzer® tablet and drop it quickly into the bottle. The cap of the water bottle should be placed on top of the bottle right after the tablets are added. Do not seal the bottle completely because the bottle could explode with the reaction.
9. Encourage students to continue to talk about what they see in the plastic bottle. They should be able to recognize that the combination are reacting in order to create an explosion inside of the bottle. Explain that the Alka Seltzer® is heavier than the water so it sinks all the way to the bottom, dragging some of the oil with it. The water begins to dissolve the Alka Seltzer®, releasing the oil and allowing it to float back up to the top. The Alka Seltzer® had reacted with the water to create tiny bubbles of carbon dioxide gas. The food coloring and glitter will show this happening creating colored bubbles floating towards the top of the bottle. When the bubbles popped, the color blobs sink back to the bottom of the bottle creating a burst of color.
10. The reaction will continue for a few minutes. Once the reaction slows down, use the worksheet handed out to finish drawing what has happened, with the addition of Alka Seltzer®. They should draw that the Alka Seltzer® sunk to the bottom and then caused the reaction to occur. Have the students answer the questions below their drawing.
11. If there is time, students can add another Alka Seltzer® tablet (or pour in salt, which works just as well after the first Alka Seltzer® piece has been added) to their lava lamps in order to watch the reaction again. This way they will be able to describe to you what is happening using correct terms, such as density.

On a handout, students will be given a picture of a blank, empty plastic bottle. Using different colors, they will draw in the outcomes of density, determining which liquids sunk to the bottom while others rose to the top. The students will also be given the opportunity to be creative and add the kinds and amount of glitter they want in their lava lamp.

Using the attached handout, students will answer a few brief questions about what they saw happening during the experiment.

7.3 Students understand the nature of mathematical, scientific, and technological theory. This is evident when students show understanding that concepts form the foundation for theories; look for evidence that explains why things happen; and modify explanations when new observations are made or new language is gained.

After completing this assignment, students can learn even more about density and reactions by mixing different substances together.

This was probably the most successful experiment we've given all year. The students absolutely loved it and it worked very well every time. We did learn; however, that if you are using larger bottles, adding salt after the Alka Seltzer® doesn't lead to a very strong reaction. Students seemed to really understand the concept of density after we completed the lesson by using the handouts and coloring in the empty bottle.

While brand new ideas are very valuable and most welcome here, tried and trusted ideas of others will probably make up the bulk of the material on this site. It is important to respect the copyrights of others, and also to acknowledge their ideas. A full citation to published materials is essential and also useful. If there are online materials that would be useful to supplement your program, link to them from here.

If you are making your experiment in large plastic bottles, make sure to have enough Alka Seltzer® to create a reaction. These larger bottles usually won't work with the addition of salt because it doesn't create enough of a reaction considering how many substances are in the bottle. Also, if you close the cap all the way after adding the Alka Seltzer®, it could cause the bottle to explode. Be careful not to add too much Alka Seltzer®/salt so the reaction isn't too strong and make sure the cap isn't fully sealed on the bottle.