Exploring Animals and Their Environments

Students will be exposed to multiple types of animals and habitats. Also, Students will be able to understand camouflage and why animals need to blend into their environment.

The types of habitats presented are:

Figure 1: Animals in the World Source-WikiMedia Commons Uploaded by Erleellis

Figure 2 A Picture of our Supplies

There will be a list of animals and their habitats that will be handed out while students are creating their drawings. This will help students classify what types of animals would like each habitat being drawn. This handout can also serve as a homework assignment if there is not enough time to complete it during class. 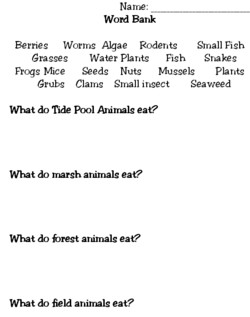 Figure 3- What Do Animals Eat?

Students will classify the types of habitats that were read in the story. The teacher will write the list on the board and assign each group with a different habitat. The students will then begin to draw the habitat on a large piece of paper. Each student within the groups will be coloring and creating the habitat. At this time each student will also choose an animal that lives in their habitat and draw the animal where they think it would be most happy in their environment. When finished, the students will look at the list of animals provided (the handout) and classify which animals would fit into the specific habitat that they created. Students will present the animals and discuss why they would do well in that type of habitat. (ex: camouflage, easy access to food and water, etc.)

(This is what can be done with an entire class. Since there were many activities going on at once we only had 4-7 students doing our activity at a time so we had them all draw on the same large paper)

Some difficulties may be that they create animals that could never exist, they may confuse habitats such as drawing a beach in the middle of the jungle, or they could place animals in the wrong environment and not understand why they would not live there. These difficulties, however, are fairly minor and can be overcome by further explanations,descriptions of habitats, and what certain kinds of animals need to survive. To avoid these pitfalls all together spend more time, as needed, focusing on different habitats and animals before asking the students to draw habitats and their own animals themselves.

The students will create their own habitats based off four of the six habitats introduced in the book we read. Each student will paticipate in drawing a particular habitat and an animal of their choice on large paper using crayons, markers, and colored pencils. They will also be asked to color the animals found on their handouts.

This book examines six habitats found throughout the world and a few of the animals that inhabit them. There are five dump pages at the back of the book containing more detailed information about each animal mentioned in the book and a map showing where each habitat in the book can be located around the world.

This activity can be related to math through use of Venn Diagrams. Students can create Venn Diagrams in groups and will draw circles to represent the habitats covered throughout the activity. Circles will overlap where habitats share commonalities such as water, trees, heat, cold, etc. Math will then be used to divide areas within the Venn Diagram and when comparing and contrasting the habitat environments. 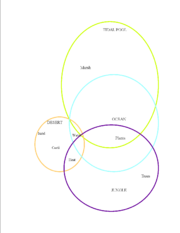 2.1.c Ask questions that compare and contrast, to determine similarities and differences.

2.7 Students respond to new information by reflecting on experience and reconsidering their opinions and sources of information.

7.1.e Explain a variety of observations and phenomena using concepts that have been learned.
7.1.h Identify problems, purpose and implement solutions, and evaluate products and designs.
7.1.i Work individually and in teams to collect and share information and ideas.

The great thing about the materials used in this activity is that you can find so many other activities to use them for after! Large paper, markers, crayons, and colored pencils can be used for endless ideas in the classroom from art projects, language arts activities, science connections, even math! The handouts can be used as a guide for the students when thinking about the habitats of different animals they encounter in their lives. From student input and questions we can further our exploration of habitats by spending more time looking in depth at particular environments or animals. Students can take the information they learned from this activity and apply it to their everyday lives as they encounter animals where they live or in the places they visit!

This activity worked well with each group we went through it with although we did make some minor adjustments when faced with shorter time frames and students who could not agree on one habitat to create. As we had less time for a few groups we stopped reading "I See a Kookaburra" thoroughly and instead looked briefly at the pictures and read the names of the animals rather than the descriptions about them. We did not expect the time slots to decrease so we were a little disappointed that we could not put the same amount of time and effort into each group. A few of the students knew what habitat meant while others understood the idea of where animals live without knowing that is specifically called a habitat. The students enjoyed being able to draw their own animals into a habitat and many knew quite a bit about where certain animals can be found, but they did not know too much about why they would not live in other habitats. The first groups were able to form a consensus on what habitat they wanted to draw on the large paper. However, the later groups were a little bigger and they had more trouble deciding as a group what to draw. Instead we cut the large paper into equal pieces so each student could draw whichever habitat thy wanted on their own. We did not have time to do much with the worksheets so at the end of the lesson we handed out the worksheets so they could bring them back home with them to color and learn more about habitats.

I See A Kookaburra by Steve Jenkins