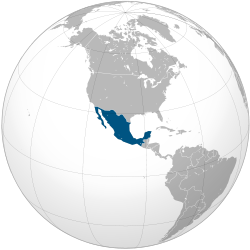 Location of Mexico
In Mexico, in general, there is a lack of IT used for open (OE) and distance superior education (DE). The biggest part of the Higher Education Institutes (HEI) that actually use them, has been only for DE, and almost no one for OE. It may be several reasons for that. The first one is that although every government has published educational programs mentioning those topics, they are always too general, without monitoring methods, and without clearly defined policies. Another reason is that public university budgets are lower every year, so the HEI do not have enough to invest on these kind of programs. Today less than 25% of the HEI, most of them private universities with very low quality, have at least one DE, and the number of students registered on those programs is less than 10%. This very little interest of the young students for choosing on line programs may be another reason because the HEI are not attracted. On the other way, we have to notice that Mexico, according with some international surveys, has one of the worst home internet infrastructure in the region. This may cause loss of interest on on-line education. There are no open courses portals in Mexico, and also a very few produced courses, 12 in total by only two HEI, all in Coursera.

For the case of VM, there are also very few experiences. We could only find three signed agreements. All of them are between the Universidad Nacional Autónoma de México (UNAM), the biggest and more important HEI in Mexico, and some foreign universities.

State of the art of Open Education

The Mexican government system is of six year periods. Every president, in the first year of government edits a National Development Plan, that derives on Sectorial Plans. The last two ones (2007-2012 and 2013-2018) have created some interesting educational initiatives. In 2007 was founded the ECOESAD: Espacio Común de Educación Superior a Distancia (Common Space for Higher Distance Education), an association of public HEI, that now group up to 39 of the most important universities in the country. In 2012 began activities the UnADM: Universidad Abierta y a Distancia de México (Open and Distance Education University of Mexico), that has been growing slowly, and offers 12 different programs. Unfortunately, these Sectorial Plans focus more on the basic education, and with less support to higher education.

Although there is no a Mexican MOOC’s portal, two HEI that have develop on this platform using the COURSERA page:

It exists a Ley para la Coordinación de la Educación Superior (Law for the Coordination on Higher Education) unmodified since 1978, and a Ley General de Educación (General Education Law), they touch only topics about budget assignment, HEI autonomy, etc. Every HEI have its own regulations.

As in Mexico there is a very little practice on those topics, there is a great opportunity to begin, especially with the help of other experienced foreign HEI. In general, the Mexican universities are open to academic cooperation.

We may notice that this moment might be of a great opportunity for Mexico to begin develop this kind of platforms, as there is an urgent need to raise the educational level of the graduates and the country’s economic situation is not very promising. A fact is that the few HEI that have been working on line education use the Moodle platform very strongly, but not on an open education effort, but as courses support. It’s only a little step needed to jump.

Main open education actors and networks in the region

Role of international networks and initiatives in the country/region

As part of its activities, the Red Universidad Empresa ALCUE (RedUE ALCUE) [ALCUE University-Enterprise Network], of which the UAM is coordinator, is promoting at Latin American level, a MOOC program to encourage the universities and productivity sectors relationship. This initiative is currently being developed along with the Universidad de Alicante of Spain and the VINTEC Program of the Ministerio de Ciencia, Tecnología e Innovación de Argentina (Science, Technology and Innovation Ministry of Argentina).

Each university has their own regulations, and in the credit transfer credit topics, each HEI is free to accept it or not.

We could find three examples of VM efforts: