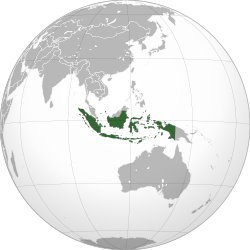 Location of Indonesia
Indonesia is an archipelago continent covering 5,193,252 square kilometers and consists of 17,508 islands with three time zones. It has 80,000 kilometers of shoreline and is the fourth most populous country in the world with an estimated 253,899,536 population. The population represents more than 500 ethnic groups. In short the country is demographically different, geographically vast with its people practicing different cultures and traditions.

About 88 percent of Indonesians are Muslims. The rest are Christians (8 pct), Hindus (2 pct) and those of other religions (2 pct). Hence, Indonesia is thus the world’s most populous Muslim-majority country. Jakarta, the capital city of Indonesia is also the most populous in Southeast Asia and the 13th most populated city on earth. The official metropolitan area known as Jabodetabek (Jakarta, Bogor, Depok, Tanggerang and Bekasi) is populated by more than 28 million people.

The country is characterized by four core problems: diversity, disparity, scalability, and sustainability (Indrajit, n.d). Its diversity results from having more than 300 ethnic groups speaking more than 500 languages and dialects. This only means that every district is unique and different from each other. The imbalance in physical development of the country through the course of history contributes to disparity.

Indonesia's tertiary education sector comprises over 3,000 higher education institutions serving 5.4 million students. About 27.1 percent of the population is enrolled in higher education. Entry into public universities is competitive. Candidates are required to sit for the university entrance examination. Jakarta and Yogjakarta, two cities on the island of Java, are home to the largest number of universities, public and private, in any one city. The rest are spread over the Indonesia archipelago.

The country’s open distance education institution, Universitas Terbuka (UT), a public institution that was established on 4 September 1984, is located in Jakarta. It delivers programs both face-to-face and online via print and non-print materials as well as through radio, television, and the Internet. It has an enrolment of over 580,000 students throughout the country, including those in some of the remote islands, supported by some 37 regional offices. The majority of its students are public school teachers and their enrolment in UT is part of the Indonesian government’s effort to ensure that all teachers are equipped with a degree.

As of Dec 31, 2011, there were 55 million Internet users, that is, a 22.1 percent penetration rate. Out of these, 51.1 million are Facebook subscribers. A 2012 survey found that the number of internet users has grown to 74.6 million internet users (Lukman, 2013b). In 2015, the number of internet users in Indonesia is expected to surpass 100 million. Lukman also pointed out that almost half of Indonesian netizens are below 30 years old, while those above 45 years old make up 16.7 percent of Indonesian netizens. About 86 percent of the netizens access the Internet using smartphones and spend between IDR 50,000 (USD5) and IDR 100,000 (USD 10) monthly for Internet access.

As Enrico (2013a) reported, consumers tend to use their personal devices (smartphones and tablets) at home. They mostly go online to socialize (38 percent), chat (28 percent), listen to music (21 percent) and play games (19 percent). About 17 percent are reading content. The percentage of penetration is relatively low compared to its neighboring country such as Malaysia whose internet penetration rate is 60.7 percent, that is, 17.7 million out of a population of 29.2 million (http://www.internetworldstats.com/asia/my.htm). However, Indonesia’s 74.6 million internet users with 41.3 million of them having smartphones is no small figure. Needless to say, a majority of internet users tend to come from those living in cities and large towns.

Overview of tertiary education in Indonesia

The vision for education in Indonesia is to produce bright and competitive individuals. Education in general is seen to be a way to address the socio-economic gap between the haves and the have-nots. However, access to higher education is not attainable by all school leavers who perform well in the national examinations due to the limited number of places in public universities and the unaffordable fees of private universities. The 3,016 higher education institutions can only serve 5.4 million students, whereas applications to enter public universities exceed

Higher education programs in Indonesia are under the jurisdiction of the Directorate of Higher Education (Direktorat Pendidikan Tinggi-DIKTI) while the National Accreditation Board for Higher Education (Badan Akreditasi Nasional Perguruan Tinggi) (BAN-PT) is responsible for accreditation of study programs and institutions. External quality assurance is the responsibility of the Ministry of National Education of Indonesia Departemen Pendidikan Nasional).

Wicaksono & Friawan noted that since the endorsement of the very first Education Act in 1961, Indonesian higher education has continuously experienced rapid expansion. In 1975, the Directorate of Higher Education took considerable changes in higher education system by establishing a basic development framework for higher education. It helped determine the roles of HEIs - public and private institutions - with linkage to regional and national development context. This framework further helped to standardize the national higher education system. It covers the structure of academic program (undergraduate and graduate), governance and organization, and the roles and responsibilities of faculty members. The latter paved the way for the end of European influence in Indonesian higher education system and by the late 1970s, a US style system of credits for courses taken with a stipulated total of credit hours for the various levels of tertiary education was adopted for university curricula. The student population in higher education institutions (HEIs) grew from about 200,000 students in 1975 to 2.5 million students in 1995.

State of the Art of Open Education

It can be generally said that Indonesia has been seeking to increase the quality of life of its people through education. However, given the number of places and those who can afford private education, only 27.1 percent of its population is able to obtain university education. It implies that for a country this size and this populated, open education may contribute to overcome the problem and help educate more people by increasing access to education. In addition, OERs will enable the sharing of these resources utilizing technology as an enabler and transformer of education. The government and education community have agreed to enable the latter through collaborative efforts among the HEIs (Nizam & Santoso, 2013).

The DGHE has invited HEIs to initiate the development of OERs and most recently, the offering of MOOCs as outlined in the next section. As Indrajit, the President of Aptikom OCW noted, there is a multi-digital gap in the nation. Scalabity is not as easily achieved as an initiative in one area is not replicable to other areas. Sustainability is another issue as it is difficult to have IT practitioners propose a financial model that can ensure long-term existence of an IT program.

The SEA EduNet project that involves SEAMEO SEAMOLEC in Jakarta includes an online repository of open education resources for teachers in South East Asia to re-use.

UT had earlier launched their OER initiative with 64 learning objects for Biology, Chemistry, Ecology, Mathematics, Physics and Statistics, all in the Indonesian language (http://www.ut.ac.id/OER/index.html)

In 2013, OERs were being used to help develop the ICT competencies of school teachers in Indonesia (see Increasing teachers’ ICT competency through open educational resources published by UNESCO.)

Recently, on 13 March 2014, Universitas Terbuka (UT) of Indonesia or the Open University of Indonesia launched the country’s first few MOOCs (http://moocs.ut.ac.id/). The five MOOCs launched by UT includes courses on:

These are available via the office MOOC site of UT and are free to the general public. The first round of courses were offered between 2nd May and 2nd July. More courses are being planned. It should be noted that funds to develop MOOCs and conduct research related to MOOC design and development are being made available by the Indonesian government.

In 2003, a new law on national education was endorsed by the House of Representatives to provide greater autonomy to HEIs compared to the previous law. The law also enabled distance education (and the use of ICT) to be used as one of the ways to deliver education to the masses. Incidentally, an Open University was established in Jakarta in 1984.

In 2005, there were nearly 2,300 HEIs, consisting of 86 public HEIs and about 2,200 private HEIs serving more than 3.5 million students. Today, the country has over 3,000 higher education institutions serving 5.4 million students. The latter is far below the required number of students applying for places in the public university and provides a strong case for open education in Indonesia.

A new law on higher education was approved to, among others, encourage the development of open and distance education, development of OERs, promote resource sharing and collaboration as well as develop an ICT based HE network and information system.

Indonesia is projected to be serving 135 million students by 2030. However, it will need more HEIs to be established. In this regard, in 2013, the Indonesian parliament enacted the Higher Education Law to invite and allow international co-operation in higher education between local and international HEIs for the delivery of undergraduate and postgraduate study programs in Indonesia (Heath, 2014). Foreign providers will now be able to obtain a license to deliver their programs locally but must show evidence that is not for profit and must prioritise engaging Indonesians as lecturers and support the national interest.