This mayfly has unique long hairs on its forelegs as the main distinguishing characteristic (allowing anyone keying to move through quickly). Carefully observe the limbs because such hair can be matted down and therefore hidden in preserved wet specimens. The body of Isonychia is slim and "minnow-like" when observed dorsally. In specimens we collected, they were commonly brown and substantial in length and width as compared to the very common Baetidae.

Even when individuals are immature, closer inspection can reveal the setae on the forelegs.

Image of the long hair on its forelegs. 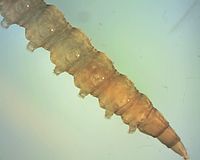 Creeping welts or broad tubercles are found on this Tipulidae. No spiracles are present, but the surface may appear roughened under the microscope.

This is the only Heptageniidae genus present in this area with two tails!
Retrieved from "https://wikieducator.org/index.php?title=Elmore_Branch&oldid=841211"
Categories: