In the earlier discussion we were able to understand the relationship between demand and price. Recapitulating the discussion briefly, The Law of Demand states that “Other things remaining the same the demand for a commodity increases when its price falls and it decreases when its price increases".Thus according to the law of demand there is an inverse relationship between price and quantity demanded, other things remaining the same. These other things which are assumed to be constant are taste or preference of the consumer, income of the consumer, prices of related goods etc .If these factors undergo a change, then the inverse relationship may not hold good. However we also observe that for commodities like salt or rice we do not notice much of a change in demand whereas in case of goods like Air conditioners, Cars etc even with a small change there is substantial increase in demand. The Law of demand while stating the relationship between demand and price mentions only the direction of change in demand but does not mention anything about the magnitude of the change which is very essential in decision making process for the producer and Government.For example:

"If I lower the price of my product, will the sale increase?"

"If I raise the price, will it affect my profit?"

“If sales tax rate is increased will it have an effect on the revenue collection?"

are questions that need to be answered. This information as to how much or to what extent the quantity demanded of a good will change as a result of a change in its price is provided by the concept of Elasticity of Demand.

Types of Elasticity Of Demand

As we have seen above there are three quantifiable determinants of demand, Hence elasticity of demand can be of three types

Concept Of Elasticity of demand Alfred Marshall introduced the concept of elasticity in 1890 to measure the magnitude of percentage change in the quantity demanded of a commodity to a certain percentage change in its price or the income of the buyer or in the prices of related goods .In this section we look at the sensitivity of demand for a product to a change inthe product's own price.Since Price Elasticity of Demand is predominantly used in economic analysis it is alternatively referred to as Elasticity of Demand.

To calculate price elasticity of demand:

Let us consider a situation where Price of tea has increased from Rs.7 to Rs 8and as a result of this demand for tea has declined from 50 cups to 48 cups.
The price elasticity in this case can be calculated as follows:
Percentage change in demand = ( New demand – Old demand)/Old demand
= (48-50)/50
= -0.04 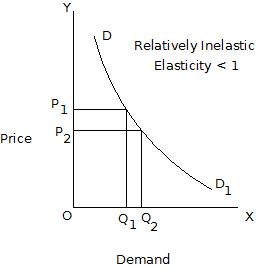 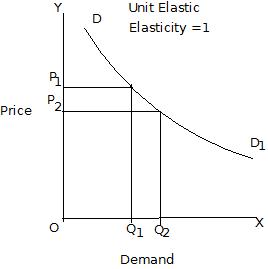 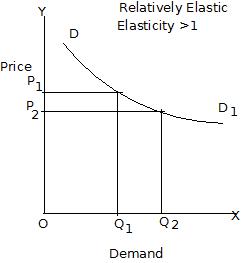 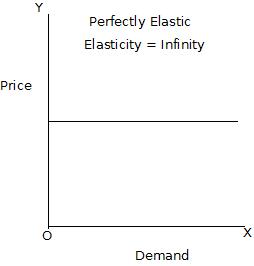 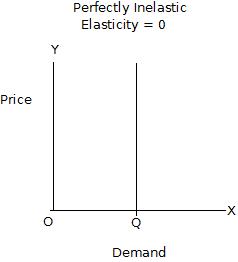 There are number of factors which determine the price elasticity of demand. Let us consider some of these factors.

Firstly if close substitutes are available then there is a tendency to shift from one product to another when the price increases and demand is said to be elastic. For example, demand for two brands of tea. If the price of one brand A increases then the demand for the other brand B increases. In other words greater the possibility of substitution greater the elasticity.

Secondly how much of the income is spent on a commodity by the consumer. Greater the proportion of income spent on the commodity greater will be the elasticity.

Fourthly if two commodities are consumed jointly then increase in the price of one will reduce the demand for both.

Fifthly time element has an important role to play in determining the elasticity of demand . Demand is more elastic if time involved is long. In the short run , it is difficult to substitute one commodity for another.

Sixthly Cost of switching between different products and services.There may be significant transaction costs involved in switching.In this case demand tends to be relatively inelastic.For example ,mobile phone service providers may include penalty clauses in their contracts.

Seventhly Who makes the payment, Where the purchaserdoes not directlypay for the goodthey consume, such as perks enjoyed by employees,demand is likely to be more inelastic.

Finally Brand Loyalty,An attachment to a certain brand either out of tradition or because of propriety barriers can override sensitivity to price changes, resulting in more inelastic demand.

Let us discuss each of these measures in detail.

Measuring Elasticity Of Demand on a Linear demand Curve
Let a straight line demand curve DD’ be given and we have to measure price elasticity of demand at the point R on this demand curve. 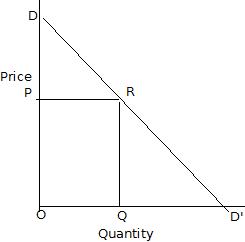 The measure of price elasticity of demand is given by  : Ep =(∆q/∆p) (p/q) The first term in this formula ,(∆q/∆p) is the reciprocal of the slope of the demand curve DD’(slope of the demand curve is equal to Change in price divided by change in quantity demanded and will be the same all along the straight line demand curve). The second term is the original price divided by the Original Quantity. Thus
Ep =(1/slope)(p/q)
Now at point R in the diagram, Original price p = OP and Original quantity q = OQ. Further ,slope of the demand curve DD’ is ∆p/∆q = PD/PR
Substituting these in the above formula we have
Ep =[ 1/(PD/PR)](OP/OQ) = (PR/PD)(OP/OQ)
However PR =OQ and they will get cancelled and therefore
Ep = OP/PD
This represents the ratio of the distances on the vertical axis.
In a right angled triangle ODD’,PR is parallel to OD’.
Therefore
Ep = OP/PD =RD’/RD
RD’ is the lower segment of the demand curve DD’ at point R and RD is its upper segment.
Therefore,
Ep = RD’/RD =Lower segment/Upper segment. 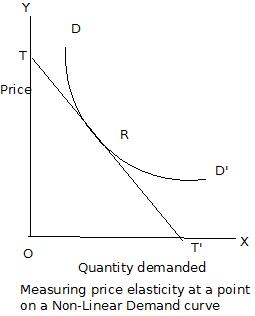 In order to measure elasticity in case of a non linear curve we draw a tangent at the given point R on the demand curve DD’ and then measure price elasticity by finding out the value of RT’/RT.


On a Linear Demand curve price elasticity varies from Zero to infinity. This can be represented diagrammatically as follows.In this diagram elasticity is being calculated at five points D,S,R,Land D'. 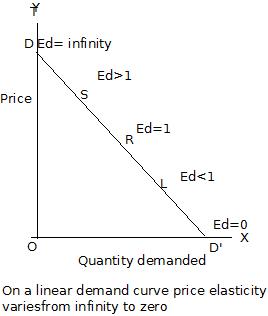 Arc Elasticity of demand When price changes are large or we have to measure elasticity over an arc of the demand curve rather than at a specific point on the demand curve, the point elasticity method does not provide a true or correct measure of price elasticity of demand . Further, in such cases, the elasticity would be different depending on whether we choose original price and original demand or the subsequent price and quantity demanded as the basis for measurement of elasticity of demand. The outcome would be different under the two situation . Hence , when the change in price is quite large then accurate measure of price elasticity can be obtained by taking the average of original price and new price as well as average of the old quantity and new quantity as the basis of measurement of percentage changes in price and quantity. Thus if the price of a good declines from p1 to p2 and as a result the quantity demanded increases from q1 to q2 the average of the two prices is given by (p1+p2)/2 and Average of the two quantities is given by (q1+q2)/2 . Thus the formula for measuring Arc elasticity Is given by
E p = {∆q/(p1+p2)/2} /{∆p/(q1+q2)/2}
= { ∆q/(q1+q2)} {∆p/(p1+p2)}
= ( ∆q/∆p) {(p1+p2)/(q1+q2)}