Tried once and worked well!

This activity is designed to teach students about the states of matter, particularly solids and liquids. Students will have the opportunity to test and observe how different materials melt snow.

1 Glass jars can be used as an alternative to beakers. They are easier to find, and are less expensive than beakers. The beakers were chosen as a tool to measure the snow, to ensure that the same amount of snow would be in each plastic cup that the students were using. If glass jars are used, a line could be drawn on the side of the jar with a permanent marker to ensure that the same amount of snow is being tested by the students in each plastic cup.

2 Almost any granual material can be tested on the snow. The key is to make sure that there will be varying results that the students will be able to see when doing the experiment.

3 An alternative to this could also be clear glass jars. Baby food jars would be a convenient size. 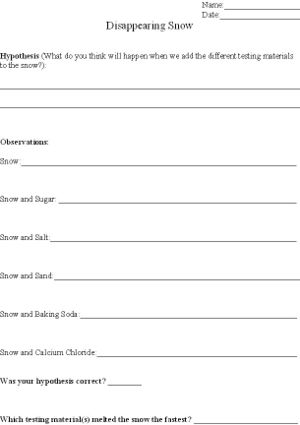 Snow is pre-measured as well as the testing materials. Students are responsible for mixing the testing materials in with the snow making sure all of the snow is at the same level. Students will place one nail in the center of each cup of snow. A time will be set as soon as the nails are placed into the snow. This will enable the students to test which testing material melts the snow the fastest. Snow is considered melted when the top of the nail hits the side of the cup. The students will stop their stopwatch when the nail hits the side of the cup. Throughout this process students will be recording their observations on the handout.

note Teacher could have students choose from a variety of materials to test on the snow, or have students bring safe materials in from home, cutting the cost of the experiment.

A fresh snowfall would work the best, but if that’s not possible, any snow would work! If snow is not available crushed ice could be used as a substitute. Unfortunately, unlike snow, crushed ice isn't free, but it would work!

Make sure your students do not come in contact with the calcium chloride. Teachers should pre-measure this for the students.

Students will learn how to operate a stopwatch and record the time it takes for each material to melt the snow.

Students can graph the results in a bar graph. They can then analyze which material melted the snow the fastest. This will help them visualize the results.

This experiment worked very well the first time we did it with students.

We recommend that you label each individual cup, as it can be confusing trying to figure out which material is which. We also suggest that a about 75mL of snow is used to test, rather than 100mL, because it melts faster, and the students are able to see a reaction to the materials more quickly. This makes the experiment more exciting for them!

It is an absolute must that a nail is put in the middle of the snow so that the amount of time it takes the snow to melt can be measured! This adds a math component to the lesson, which would otherwise not be a part of it.

Link to the Grade Level Expectations [1]