This module is estimated to take between 4 and 4.25 hours of learner time. 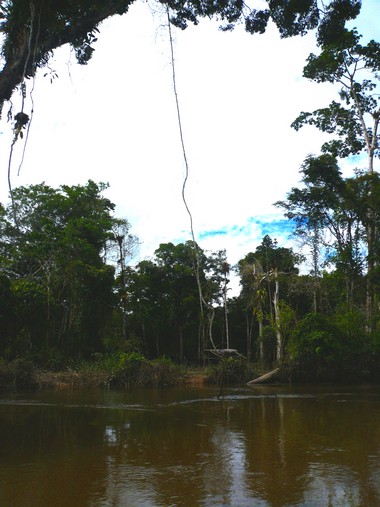 Ensure that the students have access to this photo. Use it as a launching point for stimulating conversation and guided discussion. The following "I wonder ..." questions may serve to aid in focusing the class or group discussion:

The learners may also be encouraged to form their own "I wonder ..." statements, in which case the educator may decide to allow the learners to pair up with a partner to first share their ideas - this will aid the students to gain confidence before contributing their statements to the whole class.

What is a Rainforest?

Rainforests are dense jungles with tall trees and warm climates. The main reason that these forests are called rainforests, is because they receive such a large amount of rainfall per year. Most rainforests have an annual (yearly) rainfall of at least 203 cm (80 inches) and some may even receive 2.5 cm ( one inch) or more of rainfall each day. 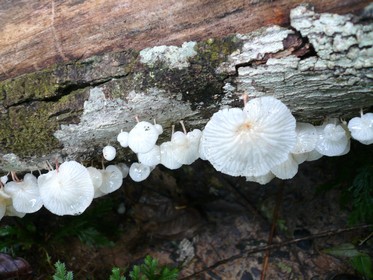 Rainforests have a great variety of animal, plant and fungal life. We call this variety of living things biodiversity. Although rainforests cover only 6% of the earth's surface, scientists believe that they are home to more than half of the earth's plant and animal species. These species often work and live closely together. The living together of two different species in a close relationship is called a symbiotic relationship. For example, in rainforests ants and fungi live symbiotically together, helping each other in the following way: fungi provide food for ants, and in turn, ants take care of and defend the fungi.

Where are Rainforests Found?

All rainforests are found in tropical regions where the sun is hot and shines about the same length of time each day throughout the year. This makes the climate warm and stable. There are many rainforests found in South and Central America, Australia, Asia and Africa. The Amazon Jungle, located in South America, is the largest rainforest in the world.

The Amazon Jungle is about the size of Australia and has the greatest biodiversity of all rainforests. Twenty percent of all birds and plants and ten percent of all mammals are found there. It is also home to the largest number of tribal or indigenous people. The Amazon River is the longest river in the world. Its length is 6,750 Km.

Each year the Amazon loses roughly 51 000 square kilometres of vegetation due to deforestation.

This activity could be presented as a race or timed challenge.

Activity Two: Time for the Complete Deforestation of the Amazon

The Layers of a Rainforest

Tropical rainforests are divided vertically into five layers. So if you draw an imaginary line down from the top of a tree (the crown) to the ground, your line will pass through all five of the layers. The animal and plant life found in each of these layers is different. The five layers, from the highest to the lowest, are:

It is not always possible to easily tell the different layers apart – rather like the colours of a rainbow. Also, not all rainforests have all of these layers and some forests have more layers than others; however, these layers show us the basic structure of a rainforest.

The Importance of the Canopy

The canopy is home to most animal and plant life found in the forest. These animals are specifically adapted to living in the canopy, as it becomes a lot hotter and drier during the day compared to the lower layers of the forest. The billions of leaves that make up the canopy make it difficult for the animals to see far, so they have to change the way they communicate. They do this by calling loudly or using musical songs. Even during the evening, the rainforest is never quiet; instead different animals are awake and call each other.

Like all living things, plants need food to stay alive. The leaves of the canopy (and of other plants) use the energy of the sun, Carbon Dioxide gas (CO2),Water (H2O) and a few minerals to make Glucose (plant food) and Oxygen (02). This is known as photosynthesis.

The word equation for photosynthesis is:

Activity Three: The Layers of a Rainforest

Present the list of requirements as success criteria for the learners' joint art project, rather than a traditional quiz or list of questions. The learners will demonstrate their understanding of the topic through illustration. Add explicit commentary (in text) to the appropriate sections of their drawings. The learners will engage in collaborative group work to ensure that all criteria are met. For more information, see: For further reading see: http://www.biology4kids.com/files

Plants and Animals of the Rainforest

Not only do rainforests house more that 50% of all the plants and animals on the earth, but the tropical rainforest waters are home to most of the world’s fresh water fish species. Also, more than 66% of all plant species grow in tropical rainforests. Many different and unusual animals live in all layers of the forest, from the smallest insects to large mammals. Because the canopy is made up of so many leaves that are photosynthesizing during the day, creating energy, there is an excellent source of food for these animals. In fact, there are so many species of animals in the rainforests because there is so much food available.

People of the Rainforest

Rainforests are home to millions of people. Scientists estimate that there are about 50 million indigenous people living in rainforests throughout the world, and some of these tribes have never seen anyone outside of the rainforest. In Brazil alone, there are 26 native tribes that live with little or no contact with the outside world. To protect these "lost tribes" from being attacked or killed by loggers and/or miners, the Brazilian government uses heat sensing technology to trace their whereabouts.

The people of the rainforests rely on the forest for their food, shelter and medicines. However, very few of these indigenous people live the way they used to. The outside world has changed the way they live, so instead of living off the forest, they now grow crops and often travel to nearby cities and towns to sell their crops and to buy Western goods.

The educator may prefer to ask the students to create a diorama, rather than a poster. A diorama is a 3D scale model. The rainforest should be created inside a shoebox (or something similar), using a combination of natural and artificial materials, and a large amount of creativity. If the front of the box is cut away, the contents can be viewed easily, forming an attractive classroom display. Dioramas can also be mounted on a wall. For more information on Diorama, see: Diorama - From Wikipedia, the free encyclopedia

It is important at the end of each session to revisit the big question. Encourage the learners to continually update their KWL tables.

Although they cover less than 2 percent of earth's surface, they house an estimated 50 percent of all life on the planet. The immense numbers of creatures that inhabit the tropical rainforests are so great—an estimated 5-50 million species— it is almost incomprehensible. The sheer range of numbers alone suggests the limited extent of our knowledge of these forests. For example, whereas temperate forests are often dominated by half dozen tree species or fewer that make up 90 percent of the trees in the forest, a tropical rainforest may have more than 480 tree species in a single hectare (2.5 acres). A single bush in the Amazon may have more species of ants than the entire British Isles. This diversity of rainforests is not a haphazard event, but is the result of a series of unique circumstances. [1] An estimated 70-90 percent of life in the rainforest exists in the trees, above the shaded forest floor. The primary tropical rainforest is vertically divided into at least five layers: the overstory, the canopy, the understory, the shrub layer, and the forest floor. Each layer has its own unique plant and animal species interacting with the ecosystem around them. The overstory refers to the crowns of emergent trees which soar 20-100 feet above the rest of the canopy. The canopy is the dense ceiling of closely spaced trees and their branches, while the understory is the term for more widely spaced, smaller tree species and juvenile individuals that form a broken layer below the canopy. The shrub layer is characterized by shrubby species and juvenile trees that grow only 5-20 feet off the forest floor. The forest floor is the ground layer of the forest made up of the trunks of trees, fungus, and low-growing vegetation. These layers are not always distinct and can vary from forest to forest, but serve as a good model of the vegetative and mechanical structures of the forest.

The overstory is characterized by scattered emergent trees that tower above the rest of the canopy, the tops of some species exceeding 210 feet (65 m). Below the overstory trees, the canopy stretches for vast distances, seemingly unbroken when observed from an airplane. However, despite overlapping tree branches, canopy trees rarely interlock or even touch. Instead they are separated from one another by a few feet. Why the branches of these trees do not touch is still a mystery, but it is thought that it might serve as protection from infestations from tree-eating caterpillars and tree diseases like leaf blight. To survive, canopy dwellers must have the ability to negotiate these gaps by climbing, leaping, gliding, or flying.

The billions of leaves of the canopy, acting as miniature solar panels, provide the source of power for the forest by converting sunlight to energy through photosynthesis. Photosynthesis is the process by which plants convert atmospheric carbon dioxide and water into oxygen and simple sugars. Since the rate of photosynthesis of canopy trees is so high, these plants have a higher yield of fruits, seeds, flowers, and leaves which attract and support a wide diversity of animal life. Besides attracting a broad array of wildlife, the canopy plays an important role in regulating regional and global climate because it is the principal site of the interchange of heat, water vapor, and atmospheric gases. In addition to collecting solar energy and regulating the climate, the canopy shields the understory from harsh and intense sunlight, drying winds, and heavy rainfall, and retains the moisture of the forest below. Thus the forest interior is a far less volatile environment than the upper parts of the canopy ceiling. The interior region is protected from the extremes of the canopy: temperature fluctuations, damaging solar radiation, and strong winds. Light levels are diffused and subdued, the humidity is higher and more constant, and there is very little direct sunlight in the lower canopy.