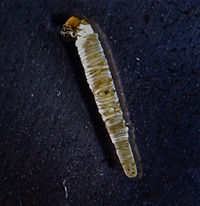 These larvae are typically found with their legs extended out of their case for feeding. The cases are circular in cross section and made of sand grains.