About UNDP and the Millennium Development Goals (AP)

The Millennium Development Goals (MDGs) are eight goals to be achieved by 2015 that respond to the world's main development challenges. The MDGs are drawn from the actions and targets contained in the Millennium Declaration that was adopted by 189 nations-and signed by 147 heads of state and governments during the UN Millennium Summit in September 2000.

This group chose to deal with the struggles of one of world's biggest killer. Through this WikiEducator page we outline some goals in order to take strides in conquering these diseases. Here is why it's important.

HIV, which stands for human immunodeficiency virus, is the virus that causes AIDS. This virus can be passed from one another through blood to blood and sexual contact. A person with HIV has an incredibly weak immune system, causing them to contract one of numerous disease that causes AIDS, which stands for acquired immunodeficiency syndrome. HIV/AIDS is a one of the main tragedies that human has faced. This disease has been like a lethal weapon to mankind for the past few years by killing millions of people.
The numbers are mostly higher in developing countries because of the lack of education and prevention resources. 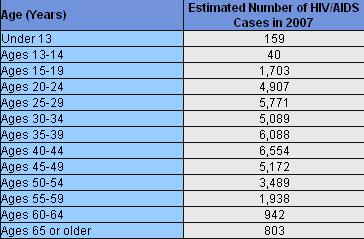 The table below shows the HIV/AIDS Cases by Race/Ethnicity. The information is gathered from CDC( Centers for disease Control and Prevention).

Also, the map below shows a global view of HIV infection.

'High-risk sex' is defined as sex with someone who men are not living with or married to. Of all the older boys and younger men in the world, 47% report to have used a condom at the last time of high-risk sex. The region with the highest condom use is North America, at 63.5%. The lowest condom use is in the Middle East at 36.8%.

Male and female condom use is not the same for a few reasons. Homosexual sex disconnects figures for men and women. Also, many men might sleep with the same women, whilst other women do not have ‘high-risk’ sex. This is particularly the case because female prostitution is more common than male prostitution. 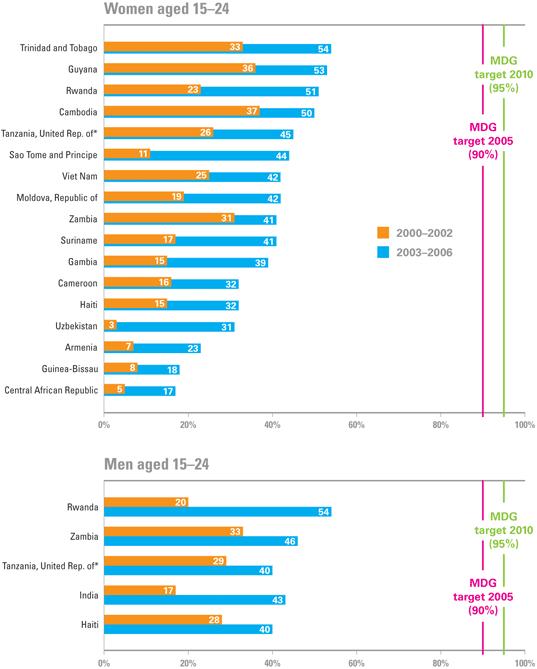 Despite the improvement and spread of treatment the amount of new cases outnumbers those who are treated. In 2007, there were almost 1 million new people who received antiretroviral treatments but the 2.7 million new cases outnumbers the treated by more than double. It is estimated that by 2007, there were only a third of people living with HIV who received antiretroviral drugs in poverty stricken countries. 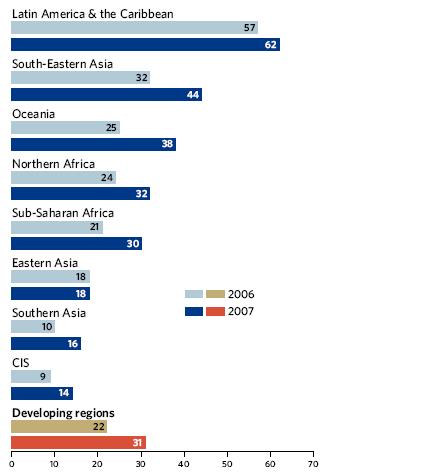 Malaria kills a child in the world every 30 seconds. It infects 350-500 million people each year killing 1 million, mostly children, in Africa. Ninety percent of malaria deaths occur in Africa, where malaria accounts for about one in five of all childhood deaths. The disease also contributes greatly to anemia among children - a major cause of poor growth and development. In Mozambique, more children die of malaria than any other disease. It accounts for 60 percent of pediatric hospital admissions and 30 percent of hospital deaths, and it is a major reason why Mozambique still has one of the world's highest child mortality rates. Malaria is also deadly for pregnant women, who run the risk of severe anemia, which can be fatal. To prevent the spread of malaria, the government distributes free-of-charge insecticide-treated nets (ITN) to all pregnant women and to children under the age of five in many of the provinces. The bed nets are an effective and cheap method of fighting malaria by preventing mosquito bites (which transmit the disease) and killing the mosquitoes. According to WHO, bed nets can cut malaria transmission by at least 60 percent and child deaths by a fifth if the nets are used properly. Since 2000, some 1.7 million bed nets have been distributed through the public health system in Mozambique. Two-thirds of those nets have been delivered via UNICEF-supported programmes in about 60 percent of the country's districts. -AP-

Response to malaria epidemics in Africa Malaria epidemics affect non immune populations in many highland and semi-arid areas of Africa. Effective prevention of these epidemics is challenging, particularly in the highlands where predictive accuracy of indicators is not sufficiently high to allow decisions involving expensive measures such as indoor residual spraying of insecticides. -AP-

Proportion of children under 5 sleeping under insecticide-treated bednets (Iris)

The number of insecticide-treated bednets has increased from 2000 to 2006. According to the Millennium Development Goal Report the table below shows the percentage of the increase in the uses of the bednets.

Children are most commonly infected with M. tuberculosis as a result of transmission from an adult (often a family member) with smear-positive disease. Most children remain asymptomatic, and a positive tuberculin test may be the only evidence of infection. For those who do progress to disease, PTB is the most common manifestation in both HIV-infected and HIV-uninfected children, although extra-pulmonary disease is more frequent in those who are HIV positive. The patterns of EPTB in children and the diagnostic problems encountered are similar to those described for adults, although meningitis makes up a higher proportion of EPTB cases in young children.
The diagnosis of childhood PTB has always been difficult because children rarely produce sputum for smear examination. Diagnosis therefore usually requires a combination of clinical features, history of contact with a sputum-positive case, growth faltering, chest X-ray, and tuberculin skin test. Chest X-ray findings on their own are nonspecific, as are clinical features, but the most important symptoms are weight loss and poor appetite. Gastric aspiration, induced sputum, and nasopharyngeal aspiration show promise as alternative diagnostic techniques but are not practical under routine clinical conditions in Africa.
Given the problems with diagnosis and the low frequency of routine childhood screening, the real burden of childhood TB in Sub-Saharan Africa is not known. One nationwide study in Malawi found that 12 percent of all registered TB cases were children less than 15 years of age (Harries, Hargreaves, Graham et al. 2001). Such investigations are a useful starting point for much-needed, population-based studies of the burden of TB in children. 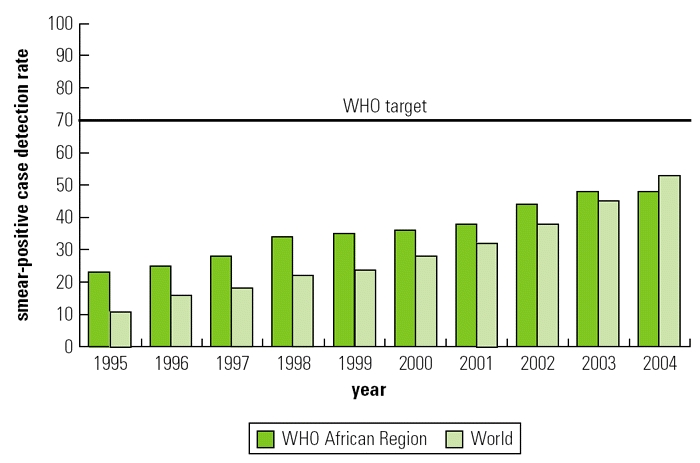 By the end of 2004, the core DOTS strategy was available in principle to 84 percent of people living in the WHO African region (WHO 2006). The estimated case detection rate by DOTS programs was 48 percent, somewhat below the global average of 53 percent, and not increasing as quickly as the global average (figure 13.6). However, much uncertainty surrounds this assessment of case detection. First, for countries that have estimates of the true TB incidence rate based on population surveys, these are typically tuberculin surveys of the prevalence (and hence, risk) of infection carried out before the emergence of HIV (Cauthen, Pio, and ten Dam 2002). Few countries have surveyed the prevalence of infection during the last decade, the exceptions being Kenya (Odhiambo et al. 1999) and Tanzania (Tanzanian Tuberculin Survey Collaboration 2001). There are no recent national surveys in Africa of the prevalence of active TB. For the many African countries that have no survey data at all, the estimate of case detection is little more than an expert guess, based on what is known (mostly qualitatively) about the method of surveillance. Second, the apparent upward trend in case detection could be explained partly by improved case finding and partly by the real rise in incidence due to HIV. In sum, the data describing incidence rates and their trends, and, hence, case-detection rates, are poor for most African countries.

The outcome of treatment in the African region is somewhat clearer. The treatment success rate for more than 480,000 smear-positive patients enrolled under DOTS in 2003 was 72 percent (WHO 2006). Treatment success under DOTS in Africa was low in part because the death rate was 7 percent, higher than in any other region of the world. More important was the large proportion of patients for whom the outcome of treatment was not known: 20 percent of patients defaulted from treatment, were transferred to other treatment centers without follow-up, or were simply not evaluated. It is highly likely that death was the outcome for some patients recorded as defaulters or transfers. Although the high reported death rates might be attributable to HIV coinfection in some countries, the failure to record treatment outcomes is evidently a problem of program management. It would be extremely useful to have comprehensive and reliable data on TB deaths and their trends in African populations, but no country in Sub-Saharan Africa, except South Africa, has a national system for recording and reporting deaths by cause.

In the New or Current Events (Anja)

Links to latest news of goal 6 Combat HIV/AIDS, Malaria and Other Diseases;