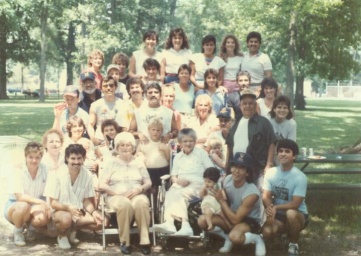 In this section, we will look at kinship patterns. These patterns determine how we connect with others through descent and marriage. It is a basic system of social organization. Kin that are related to us through descent (parent to child) are called consanguine or blood relatives. Anthropologists oftentimes discuss how many links there are between individuals. For instance, between a father and a daughter there is one link in the chain of familial connections. Between that daughter and her sibling there are two links, one to the parent and one to the sibling. If that sibling had a child then there would be three links between the daughter mentioned in the first example: one to the parent, one to the sibling and one to the niece or nephew. Kin that are related through marriage are called affine. In the United States, we refer to affine as in-laws.

In the diagram below, a circle represents a female, a triangle a male, and a square represents a person self-identified as neither sex or both sexes.

To indicate that a person is deceased, a line is placed through the symbol. Other kinship symbols indicate relationships. Some anthropologists develop their own kinship symbols. This is an accepted practice as long as a key or description of the symbol is provided.

One individual, usually the informant, is designated as the starting point for the kinship diagram. This person is identified as EGO on the diagram.

There are two basic descent systems: corporate and cognatic. Cognatic descent is also referred to as non-unilineal descent and there are two types of cognatic descent: bilateral and ambilineal. Anthropological data suggests that cognatic descent arose in cultures where warfare is uncommon and there is a political organization that can organize and fight on behalf of the members. In bilateral systems, children are equally descended through both parents. People from both sides of the family are considered relatives. This is the form of descent practiced in the United States.

Ambilineal systems require children to choose either the mother or father's side of the family to be reckoned relatives. Some Native American tribes use the ambilineal system. In the illustration below, if EGO chooses the father’s side of the family, then everyone marked in blue would be considered kin. If EGO chooses the mother’s side, then everyone marked in orange would be considered family

In corporate descent cultures only one family line is recognized as kin. The group typically owns property together. When family is reckoned along the father’s line the group is patrilineal. When family is reckoned along the mother’s line the group is matrilineal. Keep in mind that this is at the cultural level. Individuals in a culture may think of other people as kin even though they are not formally recognized by the culture itself. (patrilineal descent)(matrilineal descent)

In all societies there are social groups whose membership is based on descent; members share a common ancestor or living relative. Descent groups help to define the pool of potential mates, the group of people who are obligated to help in economic and political issues, and may even dictate which religion is followed, particularly in unilineal descent groups.

Clans are groups who acknowledge a common ancestor but the exact genealogy might not be remembered. Oftentimes, the ancestor may be so far back in time that history becomes distorted so that the ancestor takes on heroic proportions. For instance, Native American groups have clans, an ancient lineage that is often just referred to as an animal (wolf, raven). Clans can be quite big, with a large number of people.

Phratries are groups of clans (at least three clans) who are believed to be related by kinship. There are not usually economic ties between the clans.

Moieties are also linked clans; however, in this case, there are only two clans involved. There may be economic ties between moieties.

There is only one type of non-unilineal descent group, the kindred. Kindreds count all individuals from each parent as relatives. This kind of descent group is usually seen where small family groups are more adaptive than large ones and individual mobility is high, e.g., industrial societies. Often, kindreds fall apart when the unifying individual dies.

"Cross-cultural comparisons of categories of kin terms (words used to identify relatives) can sometimes reveal basic similarities and differences in worldview and experience" (Bonvillain 2010: 201). Terminology systems take a myriad of things into account (although they may not take all of these things into account):

While the actual form of the words vary from culture to culture, anthropologists have identified only six terminology systems.

The Hawaiian System. This system is the simplest in that it has the fewest terms. The key distinctions are generation and gender. For example, all the males of the biological father's generation are called father, while all the females are called mother. The Hawaiian system is common where nuclear families are dependent on other kin; the system emphasizes cohesion of the extended family. It is common among Pacific Island peoples.

The Omaha System. In this system, terms create a contrast between paternal and maternal relatives. It is found in patrilineal societies and has a small number of terms to refer to many different kin. On the father's side of the family, members are grouped by sex and generation. On the mother's side of the family, members are lumped by sex only; there are no generational distinctions.

The Crow System. This system is the flip side of the Omaha system. It is associated with matrilineal societies. In this system, relatives on the mother's side of the family are lumped by sex and generation, while on the father's side, people are categorized by sex only.

The Sudanese System. This is the largest terminology system. It has a descriptive term for each relative. There are nuclear family terms as well as terms for both maternal and paternal uncles, aunts, and cousins. This type of system is used in cultures that have both class stratification and occupational specialization along with political complexity (Ember and Ember 2011).

Some anthropologists recognize fictive kin (Bonvillain 2010), or people who are not relatives by descent or marriage. This type of kin may include adopted relatives, ceremonial relatives such as godparents and occupational brotherhoods and sisterhoods.