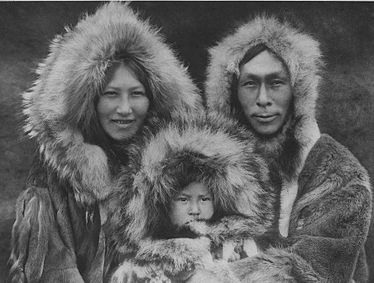 According to Bonvillain (2010: 211), family is a “basic unit of economic cooperation and stability” that generally includes at least one parent or parent substitute and children. Families provide both economic and social support for its members. It is the primary group responsible for rearing children and is where the enculturation process begins (enculturation refers to the process of learning the culture we are born into). The children in the family are not always the biological offspring. Through the process of adoption, other family members or strangers may adopt children who have lost their biological parents. This practice ensures that children without parents are cared for. In some places, children are “adopted out” due to economic hardships facing the family.

One thing that may help define a family is their place of residence after the parents are married. There are several types of residence patterns:

Patrilocal: In this residence pattern the newlyweds live with or near the husband’s family. This is the most common form found in the world. It is prevalent in societies where solidarity of the male group is important; e.g., where there is heavy labor to be done or frequent warfare. Many cultures in the Persian Gulf region and North Africa are patrilocal.

Matrilocal: This, the second most common residence pattern, is found in societies where the newly married couple moves in with or near the bride’s family. This is found in gardening societies (horticulturalists) or groups where warfare occurs with distant peoples and not near neighbors. The Hopi of the American Southwest are one example of a matrilocal group.

Bilocal (ambilocal): In this practice, the bride and groom pick which family to go live with or near. It is found in societies where extended kin networks are important and where land may be limited. The !Kung Bushmen are bilocal.

Neolocal: For this residence pattern, which is common in industrial societies, newlyweds live separate from both the bride and groom's parents. They are economically independent from their parents. With the export of American culture through modern development, the neolocal residence pattern is becoming increasingly widespread.

Avunculocal: This residence pattern is found only in matrilineal societies like the Trobriand Islanders where men of the family must be cohesive. Usually it forms when warfare is not uncommon, but the threat is at some distance. This pattern is characterized by the newlyweds living in or near the house of groom’s mother’s brother. 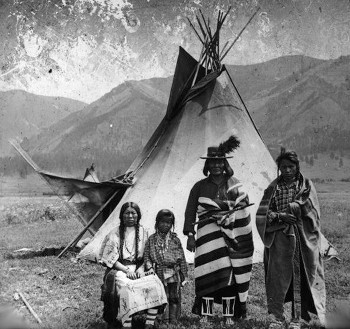 Flathead family (United States)
What constitutes a family varies across the globe depending on a variety of factors including subsistence practices and economic behaviors. Family defines obligations that group members have to one another, both economically and socially. Generally, family members live together, but that is not always the case.

Nuclear family: This is also known as the conjugal family or family of procreation. Nuclear families are comprised of married partners and their offspring. This is common in industrial societies, but it is not the most common type of family in the world, although the practice is spreading through modern development. Some anthropologists identify a second type of nuclear family, the non-conjugal family. In this type of nuclear family, there is one parent with dependent children. Additionally, there is the polygymous family, which is comprised of multiple spouses and dependent children (Lavenda and Schultz 2010; note that Lavenda and Schultz refer to a polygynous family, not a polygymous family, but polygynous does not encompass a married woman living with multiple husbands and dependent children).

Extended family: The extended family is the most common type of family in the world. Extended families include at least three generations: grandparents, married offspring, and grandchildren.

Joint family: Joint families are composed of sets of siblings, theirs spouses, and their dependent children.

Blended family: Blended families are becoming more common, especially in industrial societies like the United States. A blended family is formed when divorced or widowed parents who have children marry.

Family by Choice: A relatively newly recognized type of family, again especially in industrial countries like the United States, is the family by choice. The term was popularized by the LGBTQ (Lesbian, Gay, Bisexual, Transgender, Queer) community to describe a family not recognized by the legal system. Family by choice can include adopted children, live-in partners, kin of each member of the household, and close friends. Increasingly family by choice is being practiced by unmarried people and families who move away from the consanguine family.