Cross elasticity of Demand is defined as :The degree of responsiveness of demand for commodity X on account of a change in the Price of Commodity Y .

Cross elasticity of demand = Exy = ( ∆Qx/∆py)(Py/Qx)
=(10/1)(6/60)
=1
We can see that with an increase in the price of coffee(Y) the demand for tea (X) has increased.The two commodities are considered as substitutes. In this case the consumer substitutes tea for coffee. 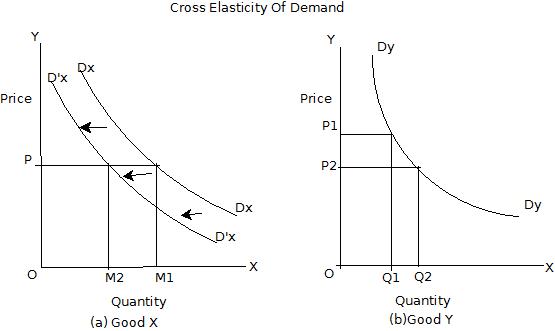 There are certain points to be taken note of with respect to cross elasticity of demand.

a.Classify the commodities in your own consumption basket as normal goods,luxury goods and inferior goods.

b.Are the commodities mentioned below normal goods ,luxury goods or inferior goods ? Give reason for your answer.