Although it is hoped that the material below will be beneficial to others, it has not been produced by the original developers of eXe, and as such may include bad practice and/or errors. Please use at your own discretion. All instructions relate to Windows XP.

The most likely reason for experimenting with the eXe source code is to create custom iDevices. Although it is technically possible to do this without adjusting the main source code, you will ultimately benefit from doing so; particularly for iDevice loading.

The following general instructions relate to setting up the eXe source code in the Eclipse 3.4.2 IDE. Other Python IDEs will obviously work, and will follow similar steps.

Debugging of the eXe source code is achieved mainly through log files, and very rarely will any errors encountered appear in the IDE. The log files can be found in the directory:

By default eXe will look for custom iDevices in a hidden system folder:

You can copy your iDevice files here, and eXe should load them, but this is less than ideal for both development and deployment. The following instructions describe how to adjust the source code so that iDevices are loaded from within the eXe directory.

The file to change is /exe/engine/idevicestore.py In the loadExtended routine the call to self.__loadUserExtended() may be commented out. Uncomment it.

In the loadUserExtended routine replace the line:

Create a folder in the eXe source code root directory named idevices, and place your files within it.

Creating an iDevice base

iDevices are described by a pair of files:

In the iDevice source folder: /exe/idevices/, you will find two example files that serve as a base for your own iDevices, and should be copied to the idevice folder. Certain parts then need to be renamed to create your new iDevice:

Main functions in the block are:

These source files will be compiled when the eXe application starts, creating pyc files in the idevices folder. If eXe fails to load, then there is most likely a problem in one of the iDevice files.

The methods for the element objects are intended to present information in a HTML format. As such they generally return text formatted with HTML tags. If you want to access the values of the elements (e.g. the actual text in a TextArea element), then you will need to add extra methods. These can be very simple, such as:

Use the render methods as a guide to see how to access the properties.

eXe uses a temporary resources folder, where media is saved, and then copies the contents of this folder during export/saves. If you create an iDevice that requires certain files (e.g. a javascript library or Flash movie), then you will have to register this file as a resource, to ensure that it is saved and included in exports.

One way (probably not the correct way) of doing this is by adding the following code (originally taken from the applet iDevice):

In the iDevice, import the required functionality:

Again in the iDevice, add a method:

Files can now be registered from the block using the code:

The uncertainty is where to add the code in the block file. Adding it to the renderPreview code works, but an attempt will be made to add the file everytime the preview is generated. eXe includes several safeguards for checking if files have been added or if 'zombie' files are present (i.e. files that are no longer attached to an iDevice), but it is probably not a good idea to rely on these. If the file only needs to be added once, then consider having a boolean variable to flag if it has been added or not.

Additional UI components can be added to iDevices with relative ease. There are however several specific pieces of code that must be added in several places for it to work correctly.

Depending on the element that you wish to add, you must import the relevant field object:

Within the __init__ method you must then create an instance of that object:

titleText is the variable name that you define yourself.

In the block you must import the matching element object:

Within the __init__ method you create an instance of this object, and associate it with the idevice field:

In the process block, you must add code to catch a submission of the form (when the user has finished editing), and save the data.

In each render function you must now add code to display the component. These calls generally match the name of the render function, for example in the renderEdit method you would use the call:

In some situations you may need a varying number of UI components; for example in the supplied MCQ iDevice you can create additional question and option fields as required. The method for doing this is again quite straight-forward, so long as all the pieces are in-place. The general method of doing this is to have an array in both the idevice and block files, to which new objects are added once created.

In the __init__ method define an array to hold the fields:

Include a method that will add objects into this array; for example:

In the __init__ method define an array to hold the elements:

In the renderEdit method, you will need to include an option for adding a new UI element (be sure to import the common library from exe.webui):

This will display a button during edit, which when clicked will send an addPair request to the server (eXe runs as a paired browser and server). To catch this call, add the code below to the process method.

Returning to the __init__ method, we will add code to create the element objects as required (add underneath the previously added array code: self.pairElements = []).

To display elements once they have been created you will need to loop through the array. The example below would be added to the renderEdit method:

If you add the code up to this point, then the elements would appear when editing, but their contents would not be saved. The method to resolve this is similar to that used for static elements. Add the following code to the process method:

Some activities are still easier to produce in Flash than javascript; with the added benefit of a self-contained element that will not interfere with any other scripts on the page. It is possible to use data entered into the eXe editor to configure a Flash movie in several ways, but the method covered here involves appending data to the filepath (in essence the URL).

The Flash movie will be embedded using code in the format:

The important part is the emboldened text params. It is here that values can be passed to the flash movie, in the format:

You would use this format when constructing the html string in the render methods. For example:

The replace function is important, since the appended string is technically a URL, and so must conform that that standard. In the example above spaces are replaced with %20. If you are expecting other non-allowed characters, then you should replace those as well.

Note that there are two locations where the parameter code should be appended, and that the Flash movie must be added to the resources folder (see Adding Resources).

In Flash (AS3) this information can be accessed through:

You can now use these values to configure your Flash front-end, for example a pair-matching drag and drop exercise (see screen shot below). 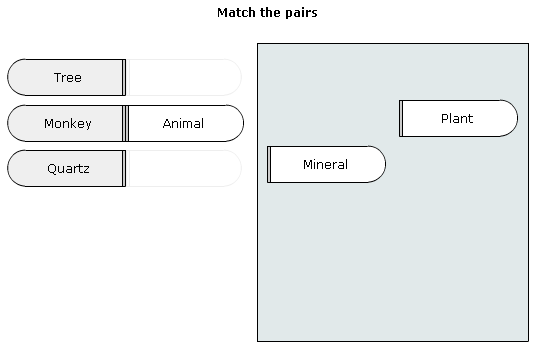