The concept of a crossover point was introduced in Unit 2 when comparing the costs of offering the same course through ODL methods and conventional education. 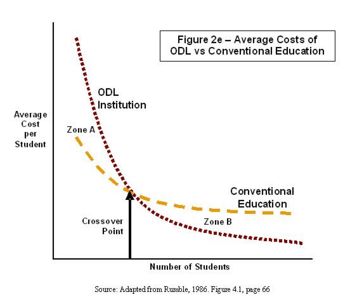 A similar concept is useful when comparing how the total costs of two modes of delivery behave in response to changing student numbers. Both Rumble (1997, pages 37-40) and Hülsmann (2004, page 16) refer to this as the ‘break-even’ point, but this usage may be confusing since the term is commonly used to refer to the level at which income starts to exceed expenditure. For this reason, the concept is referred to here as the crossover point. In this context, the crossover point is defined as the level of enrolments at which the total costs for one mode of delivery become lower than the total costs for another delivery method.

As an example, consider the case of an open school which needs to deliver audio content for one of its courses. Managers need to compare the relative costs of doing this through radio broadcasts and cassette tapes. 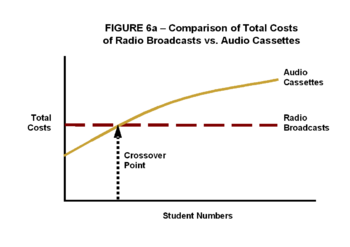 Broadcasting content on the radio involves high fixed expenditure for writing and recording the programmes, as well as any payments to the radio station for air-time. However, once these fixed costs have been paid, there are no additional variable costs in providing content to students. Although many of the production costs needed to produce a radio broadcast (for example, script-writing, studio recording and audio-editing) are also required to make a cassette tape, there are also variable costs associated with the reproduction and distribution of the cassettes. Thus, the total costs of providing content through audio cassettes continue to rise as student numbers increase, while those for radio broadcasting remain flat, as illustrated in Figure 6a.

In this example, the total costs of audio cassettes exceed those of radio broadcasts after relatively few students have enrolled for the course. 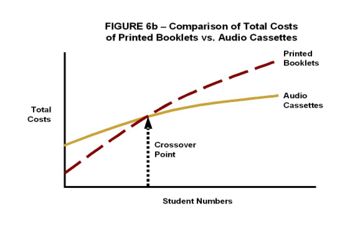 Now consider a different case, where a college of open learning is planning to deliver content for one of its courses either through printed booklets or by means of audio cassettes. Figure 6b illustrates the crossover point when comparing the total costs of these two technologies. Both modes of delivering educational content are a combination of fixed and variable costs, though the fixed expenditure for developing print-based materials to the point were they are ready for reproduction is only about half of that for audio cassettes in this example. However, the average variable cost of printing a booklet is higher than that for reproducing a cassette, with the result that the total costs of the former rise faster than those for the latter. In this example, a higher level of student enrolments is required before audio cassettes become cheaper than printed booklets.