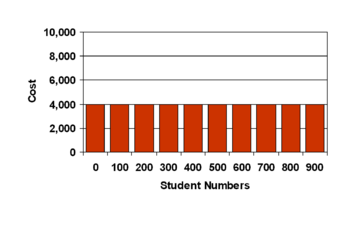 You will recall that, when an item of expenditure remains the same regardless of the increases or decreases in the level of activity, we refer to this as a fixed cost. For example, placing an advertisement in the newspapers as part of an information and recruitment campaign for a particular course would represent a fixed cost. If we were to draw a bar chart of the fixed costs for this course, it would look something like Figure 2a.

The bar chart shows that the fixed costs for advertising this particular course were ZAR 4,000 irrespective of whether one student or nine hundred students enrolled for it. 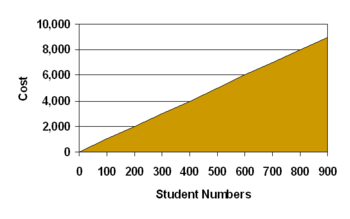 By way of contrast, variable costs increase or decrease in proportion to increases or decreases in the level of productive activity. This is graphically illustrated in Figure 2b. 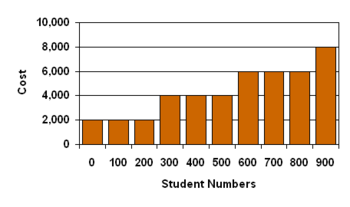 Finally, you will remember that semi-variable costs behave like fixed costs within a particular range or level of activity. Once that range is exceeded, then the amount spent will rise in a step-by-step fashion. A typical example of semi-variable costs can be seen in Figure 2c, which illustrates expenditure for hiring examination halls and employing invigilators.

When student numbers on this particular course are between 1 and 299, they can be accommodated in a single examination hall under the supervision of one team of invigilators at a cost of ZAR 2,000. However, if three hundred students are enrolled, they can no longer be accommodated at a single examination venue. Semi-variable costs will thus increase to ZAR 4,000, because it will be necessary to hire a second hall and employ additional invigilators. These step-like increases occur every time student numbers increase by three hundred.