Original prototype of the $35 Aakash Tablet

Personal context in the arena of change 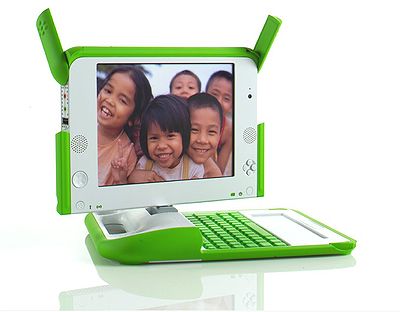 One laptop per child (OLPC) initiative

The development of new communication technologies is of particular interest in education given the potential for changing the way we teach and learn.

Think about the historical impact of the printed book, radio, television, personal computers, the Internet and mobile devices on education. Some technologies have changed the way we teach and learn, whereas others have had very little impact notwithstanding the associated predications of change and radical improvement.

Simple technology devices can have a major impact in unexpected ways. The overhead projector was a significant invention because the teachers could face the learners making eye contact rather than working with their backs facing the class when writing on the chalkboard. In contrast, in the 1920's radio was predicted to change education in material ways. The November 1924 issue of Science and Invention suggested that with radio "home work will now be a great joy to the kiddies and lesson will be learned with much greater facility[2]". In Australia, however, the School of the Air was instrumental in using radio to deliver education to the outback.

This raises the question:

Why do some technologies change the way we teach and learn, while others don't?

In this unit we shift our focus to the personal context within the arena of change which includes the innovation and the people directly involved, namely the educator and the students. We will investigate theories and models which aim to explain how technology is adopted in the classroom. To do this we need to consider the characteristics of the innovation itself and how people interact with new technologies. In this unit we will provide stimulus resources covering the major models and theories related to the personal context (see below) and you are encouraged to widen your search to include research literature relevant to your own research topic.