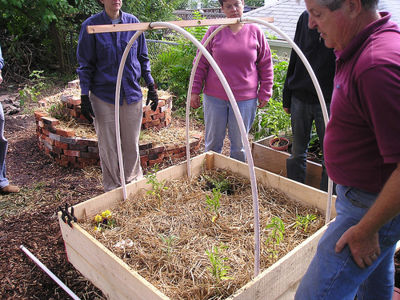 demo of frame by JoePhoto

The word permaculture, coined by Australians Bill Mollison and David Holmgren during the 1970s, is a portmanteau of permanent agriculture as well as permanent culture. Through a series of publications, Mollison, Holmgren and their associates documented an approach to designing human settlements, in particular the development of perennial agricultural systems that mimic the structure and interrelationship found in natural ecologies.

Permaculture design principles extend from the position that "The only ethical decision is to take responsibility for our own existence and that of our children" (Mollison, 1990). The intent was that, by rapidly training individuals in a core set of design principles, those individuals could become designers of their own environments and able to build increasingly self-sufficient human settlements; ones that reduce society's reliance on industrial systems of production and distribution that Mollison identified as fundamentally and systematically destroying the earth's ecosystems.

While originating as an agro-ecological design theory, permaculture has developed a large international following of individuals who have received training through intensive two week long 'permaculture design courses'. This 'permaculture community' continues to expand on the original teachings of Mollison and his associates, integrating a range of alternative cultural ideas, through a network of training, publications, permaculture gardens, and internet forums. In this way permaculture has become both a design system as well as a loosely defined philosophy or lifestyle ethic. Wikipedia Jan 2008

The following 2 pages are in this category, out of 2 total.