A diskette comprises a plastic flexible disk enclosed inside a tough plastic cover. At one end is a window. When the diskette is placed inside a diskette drive, the window is pushed to the side. The read-record head inside the drive makes contact with the magnetic disk. 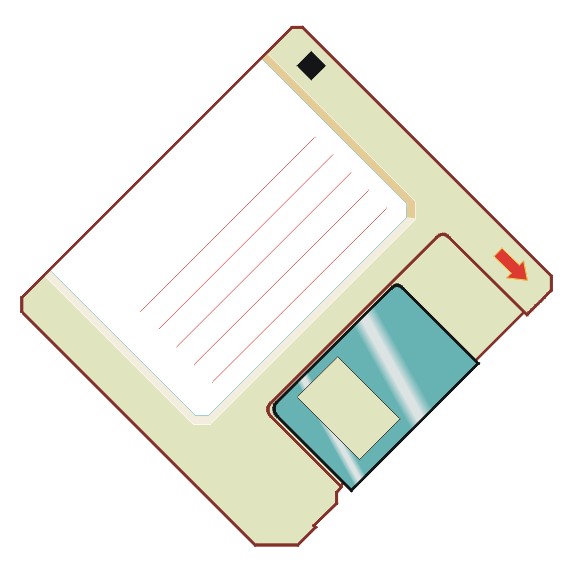 Diskettes are slow and have a low capacity (1,44 Mb). Since they are cheap, they still tend to be commonly used for storing small amounts of data. Another advantage is that they can be used over and over again. Unfortunately, many are not very good quality and data can become corrupted and unusable. Because of this they are not suited to backup purposes. The disks can become corrupt through many causes including disk, heat, magnetism or moisture.

A zip disk is a removable magnetic disk which fits into a special zip drive. The surface is coated with a special scratch resistant material which makes a zip disk a very robust storage device. It comes in a number of capacities: 100, 250 and 750 Mb. The speed of a zip drive is faster than all but the very fastest of CD drives. Its robustness and speed make it an excellent backup device. However, its capacity is much less than that of hard drives and tape drives which limits its use for very large amounts of data.

A data cartridge is a tape very similar to that found in a tape recorder, only much higher quality. These are used in a device called a tape streamer to record data. Data cartridges, especially if good quality, are reliable and cheap devices for creating backups of large quantities of data. They are, however, rather slow. Data cartridges are sequential devices which means that to access an item of data on them, all the preceding data reads to be read first. They are tending to become obsolete as newer faster and more reliable technologies are available. A single tape can stored many Gb of data.

A CD ROM uses optical technology. When data is written, small pits are burned into the surface using a highly focussed laser beam. These are read by another laser beam.


There are two types of CD ROM used for storage. The CD-W disks can only be written to once. Once data has been written to part of the surface, this part can no longer be used. CD-RW disks are designed so that one set of data can overwrite another. This allows the disks to be re-used many times.


CD ROM technology is improving all the time with continued improvements in quality and speed.

The Digital Versatile Disk is a development of the storage technology of the CD ROM. Using newer storage methods and higher quality media, a DVD can store about 4 Gb of data. This is enough to store a full length film.


An external hard drive is a good backup medium and allows large quantities of data to be stored. Since the same drive can be connected at different times to different computers, these drives provide a useful way of transferring data between computers that are not connected through a network. As they are electromechanical devices, they are subject to mechanical failure if not handled with care. The small 2½“ drives used in laptops make excellent external hard drives since they are constructed to be moved around.


Modern hard drives have capacities from 40 Gb to 160 Gb. They are also relatively cheap in terms of the storage capacity they offer.


Because they contain moving parts, they do eventually fail. When a hard drive fails is quite unpredictable. Any suspicious noise coming from a hard drive should be viewed with great caution and the data it contains should backed up immediately. The expected life span of a hard drive is measured as the mean time between failures. This is a very rough average of the working life. Figures of 250 000 hours are often quoted but these should be viewed with caution.


Numerous systems have been developed to protect data on hard disks. One of these is mirroring where the data is stored simultaneous on two disks. The one disk becomes the mirror image of the other. If one fails, the data is still one the other. In this case, the first disk is replaced, the system creates a mirror image of the first disk automatically and the system continues.


There are a number of measures of performance of a hard disk. One is the speed at which the platters turn. Typically this is somewhere between 4800 and 7200 rpm. There are faster, more expensive disks. Another is the access time. This is the time it takes the disk to access an item of data. A good figure here would be around 10 ms. An ms or millisecond is one thousandth of a second. Disks are also sometimes compared in terms of their data transfer rates. This is a measure of how many bytes can be read or written per second.

A new type of external memory is the flash disk or memory stick. This is a solid state device (no moving parts) that connects to the computer via the USB port. It provides a very fast and reliable method of storing data externally.

They are at the moment fairly expensive, especially the larger capacity devices. They tend to be limited to a maximum of about 8 Gb. This figure can be expected to increase quite dramatically over time.

This table tells you that it is about 100 times as expensive to store a Mb of data on a floppy disk as it is on a hard drive.


Use this table with caution. Treat the values as very approximate relative values. In other words use them as comparative values, not as monetary values.

A new diskette or hard disk is not able to record data immediately. The disk first needs to be prepared by a process known as formatting. This marks out concentric circles called tracks. Each track is divided into a number of sectors. The tracks and sectors are marked out using magnetic markers.


As data is recorded on a disk, it fills up. To be able to re-use a disk, it may also be formatted. This releases the areas that contain data so that new data may be stored in its place. When a disk is reformatted, the old data is lost.


When data is stored on a disk, it is not always stored in a continuous pattern. Rather, the system stores data in the first free area it finds. When this has been filled, it looks for additional free space and continues storing the data. A file ends up being stored as a series of segments across the disk. This breaking up a a file into many segments is called fragmentation.


Fragmentation slows down the operation of the disk as the system needs to keep track of all the different segments. A disk may be re-organised to reduce fragmentation by a process called defragmentation.


There are different file systems available, but in all cases the disk needs to be prepared with the index area, tracks and sectors through formatting.


As mentioned previously, disk can be reformatted. In this process everything on the disk is erased and the disk is formatted as if it was a new disk.


The following diagram represents the tracks (green) and sectors (red triangular area) that are created when the disk is formatted and ready to store data. 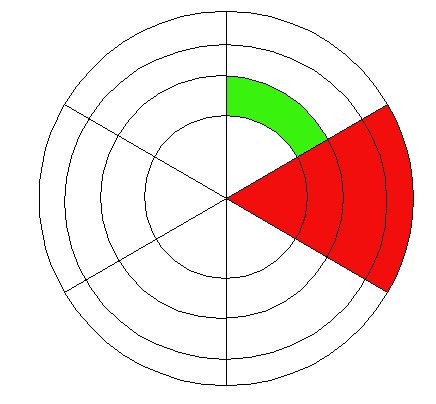