Bits In all the components of a computer, data and instructions are stored as patterns of ones and zeros. These individual ones and zeros are called bits.

Bits are grouped together into sets of eight. A set of eight bits is called a byte.

ASCII or American Standard Code for Information Interchange was a system of representing all the characters of the western alphabet and certain special characters in a single byte. You can think of the byte as the amount of memory required to store a single character.

As there are only 256 possible variations within eight bits, this is not sufficient to represent other alphabets. As a result a new system, called Unicode, has been developed to represent all the alphabets of the world. This makes use of two bytes or sixteen bits. With two bytes, 65536 different characters and symbols can be represented.

Because we use very large numbers of bytes for storage, abbreviations are used for large numbers. These are based on powers of two and are set out in the following table.

The capacity of hard drives is measured in bytes. A modern hard drive has a capacity of 250 Gb or more.
When files are stored on disk, the amount of space they occupy is measured in bytes. The following screen shows a partial listing of files in a directory. Notice the second column which contains the size of the file in bytes. (Don't be concerned with the detail of this screen - it is shown purely for illustrative purposes.) 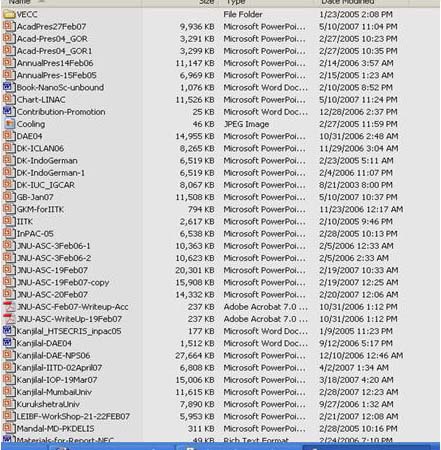 When we work with files and directories, we often need to know how large the files are or how much space a directory and its files occupies.