Parts of the CPU

At the core of every computer is a device known as the central processing unit, or CPU in short. The CPU is the brain of the computer generally referred to as processor or central processor. CPU reads and executes program instructions, performs calculations, and makes decisions. It controls the operations of all the hardware of the system and is responsible for storing and retrieving information on disks and other media. There are three main components to the CPU: the arithmetic-logic unit (ALU), control unit and primary memory.

Primary memory: primary memory provides temporary storage of programs in execution and the data being processed. It is an immediate access storage device. Primary memory can be further classified in to Random Access Memory (RAM), Read only memory (ROM) Because the CPU can perform its operations much faster than data can be transferred from RAM, many CPUs have on-board cache memory. This is memory that the control unit can access very quickly and use for intermediate storage. Further, data and instructions can be loaded into cache before they are actually needed. When they are needed, the transfer is much faster than it would have been if RAM had been used. 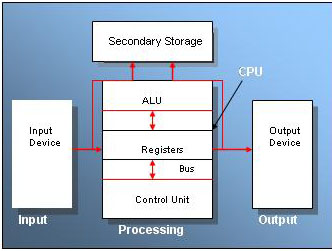 On large computers CPU’s require one or more printed circuit boards. In the case of PCs and small workstations they are housed in a single chip called microprocessor. Apart from the ALU and Control unit the CPU also contains several registers that can store data. Registers are a collection of processing and storage units within an ALU and Control Unit that are linked internally and externally by busses which carry binary signal within.

Speed of the CPU: The CPU operates as a result of electronic pulses sent to it by another device on the motherboard called the clock. The speed of a CPU is measured by the maximum number of pulses it is able to handle. This is measured in MHz (megahertz) or millions of pulses per second or GHz (gigahertz) thousands of millions of pulses per second. A good personal computer will use a CPU with a clock speed of over 3 GHz. This means it receives 3 000 000 000 million pulses every second from the CPU.