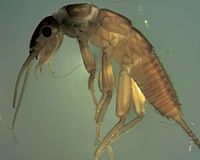 This is the only Heptageniidae genus present in this area with two tails!
Retrieved from "https://wikieducator.org/index.php?title=Brewster_River&oldid=841195"
Categories: