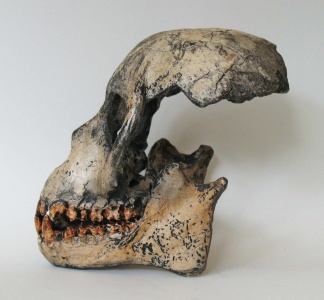 Now that you have an understanding of living primates' morphology and behavior, it is time to learn about the origins of primates. the study of primate evolution is multidisciplinary in nature and incorporates data and methods from paleontology, geology, anthropology, and archaeology to study the fossil record of primates. 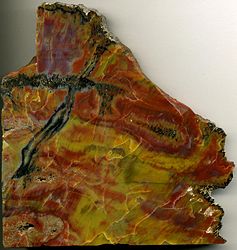 Fossils are at the center of the study of ancestral primates. Animal fossils provide insight into morphology and behavior of ancient organisms while plant fossils help paleoanthropologists reconstruct ancient environments (paleoecology). One thing to keep in mind is that, "the fossil record is highly skewed in favor of organisms that died and were preserved in calm seas, estuaries, tidal flats, or the deep ocean floor (where there are few scavengers and little disruption of layers)" (Panell 2014: 1839). There are multiple ways that fossils form. Permineralization, or petrification, is the most common process. This occurs when organic remains decay and water seeps into the remains and deposits minerals that form crystals which harden. Generally, it is the bone that is fossilized as they are the hardest parts of the body and take the longest to decay, giving time for the minerals to crystalize and harden. Fossils can also form when an organic entity is encased in tar, resin, or even ice. When this occurs bodily tissues can be preserved, but it as extremely rare occurrence. Carbonization can lead to fossilization as well. When an organic item is buried in sediment, heat and pressure causes the release of hydrogen and oxygen, which leaves behind a carbon residue. To read more about other methods, check out the article, "How Do Fossils Form?" You can also learn more about the fossilization process by watching this short video, Becoming a Fossil.

When a fossil is found, it can be dated using a variety of methods. Some methods date the fossil itself; other methods use the surrounding matrices. There are relative dating techniques that provide an order of occurrence, but no absolute dates, and there are absolute, or chronometric, dating techniques that provide dates (usually a range of dates) for an object. Examples of relative dating techniques include stratigraphy, index fossil concept (biostratigraphy), and flourine dating. Stratigraphy involves mapping observable geologic strata and the artifacts (e.g., fossils) included in those layers. Building on stratigraphy, index fossils are used as time markers. Let's say that one type of fossil was found in a strata at Site A and the same type of fossil was found in a strata at Site B, then we can assume that the strata and fossils at both sites were deposited at the same time. Flourine dating is a process that uses the amount of flourine accumulation as a basis for comparison between objects, e.g., if two objects have similar amounts of flourine then they were most likely deposited at the same time. Radiometric techniques are commonly used for dating fossils. Radiocarbon (14C-dating) was the first radiometric dating technique developed; it revolutionized anthropological studies of the past. 14C-dating can be used on organic materials and is accurate to about 70,000 years ago. It measures the rate of decay of carbon-14. Fission tracking involves measuring the track density of decaying uranium-238. As this method works best on igneous materials, it can be used to date the matrix surrounding fossils. Potassium-Argon dating (K/Ar-dating) is employed frequently in the study of primate origins. This method measures the rate of decay of potassium-40 into argon-40. Again, the rock surrounding fossils is dated and not the fossil itself. These are just a few of the dating methods used. You can learn more about these and other dating methods by reading the article, "Dating Rocks and Fossils Using Geologic Methods" (optional).

The study of what happens to organisms after they die is called taphonomy. Taphonomic studies of fossils is important in order to understand the context of the fossil and the environment from which it came. Has the fossil been disturbed in any way? Has it been moved by water, scavenged by animals, etc?

Paleoecologists study "...the physical structure and biological functions of organisms, their interactions with other, and their role in ancient ecosystems" (Lerner and Lerner 2014: 3217) to determine what the landscape may have looked like during the time that a particular organism, including primates, lived there (remember, evolution is environmentally dependent!). There are several specialized areas of study within paleoecology. Paleobotany is the study of fossil plants. For more on paleobotany, check out Dr. Robert Gastaldo's site: A Brief Introduction to Paleobotany. Paleopalynology is the study of fossil pollen while phytoliths are fossilized plant cells. 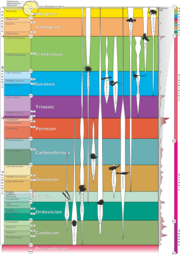 From geology we have an understanding of the time involved in the development of earth. In biological anthropology, we are specifically focused on the late Mesozoic/early Cenozoic eras in relation to primate evolution. You should be familiar with the time ranges for the epochs of the Cenozoic. Below you will learn about primate developments associated with each epoch.

If you are feeling particularly investigatory today, you may want to check out the 2009 geologic time scale published by the Geological Society of America (optional)

The Mesozoic: the origin of mammals

The Mesozoic era is known as "the age of the dinosaurs" due to their ecological dominance at the time; however, it is during this era that the first mammals evolved, including a primate-like mammalian ancestor. Research using DNA analysis and fossils suggests that by 75 mya (million years ago) all of the mammalian orders had diverged. The various mammalian families began to diversify in the Cenozoic era (Jurmain et al. 2013).

Several things happened at the end of this period that led to a rise in the mammals:

Proto-primates, primate-like mammals, evolved in the Paleocene epoch, about 65 mya. The proto-primates from this epoch are controversial; some argue that they are related to primates but are not actually primates (hence, "proto-primates"). The strongest evidence linking these proto-primates or Plesiadapiformes to primates comes in the form of Carpolestes simpsoni, a pleasiadapid found in Wyoming, USA. This fossil species has an opposable big toe, grasping fingers, and nails instead of claws (Bloch and Boyer 2002). 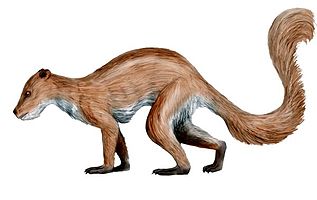 To learn more about the Plesiadapiformes, watch this optional short film: First Primates. Still want to learn more? Check out "Primate-like Mammals: A Stunning Diversity in the Treetops" (optional).

The Eocene epoch (56-33 mya), with its warmer and wetter climate and adaptive radition of rainforests and angiosperms, sees the emergence of the first true primates, also called euprimates. Bloch and Boyer (2002) suggest thatCarpolestes is ancestral to the euprimates. Over two hundred Eocene fossil primate species have been identified (Jurmain et al 2013). The euprimates are about the same size as modern squirrels, with prehensile hands and feet and more forward-facing eyes that gave them stereoscopic vision. These earliest primates are most like the strepsirhines and have been found in North America, Europe, North Africa, the Middle East, and Asia, which were all still connected during this time frame. Based on the fossils that have been discovered to date, we can suggest that Eocene primates were (Jurmain et al. 2013: 189):

There are two main families of Eocene primates: 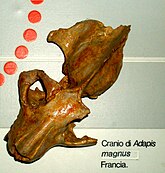 Most recently, the discovery of Darwinius fossils in Messel, Germany will help to shed light on the evolution of the euprimates. Darwinius, dated to 47 mya, is the most complete fossil found from the Eocene. Darwinius appears to be a transitional adapid ancestor to monkeys and apes, which contradicts what most researchers claim that omomyids are the ancestors of monkeys and apes. As researchers other than the discoverers have opportunities to study the fossil, more will be made clear. 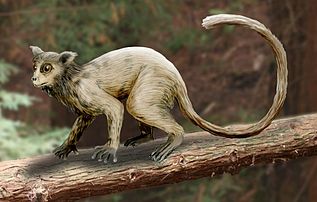 The Oligocene epoch: the monkey/ape divergence (34 to 23 mya)

The global climate shifted again, cooling and drying, during the Oligocene epoch (33-23 mya). There is a reduction in the amount of rainforests, which retreated toward the equator, but an expansion of grasslands. So, there was an increase in terrestrial (ground) niches and a decrease in arboreal (tree) niches. While most of the fossils from this time are Old World monkeys, some are ancestors of New World monkeys; at this point the American continents had separated from Africa and Eurasia. 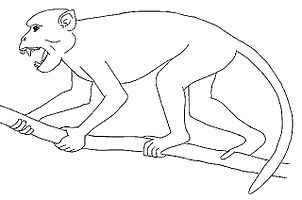 More on the origins of New World Monkeys: The Origins of Platyrrhine Monkeys in South America

The Miocene epoch: the Old World monkey/ape divergence (23 to 5 mya)

There were two climate shifts during this period, first there was a warm period with heavy forestation, followed by drier and cooler climates with decreasing forest and increased grasslands.

At this point, the Old World monkeys and apes split within the catarrhines. The fossils are from east Africa.

The ape ancestors had the following traits: 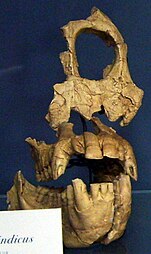 The Old World monkey ancestors at this point in time had the following traits:

Where did primates come from?

There are three primary hypotheses about the origins of primates. The earliest hypothesis, the arboreal hypothesis, claims that the first primates evolved a suite of traits for living in trees, e.g., grasping hands and feet and stereoscopic vision. This hypothesis held sway from the early 1900s until the 1970s when the visual predation hypothesis was proposed. This hypothesis suggests that primates evolved because they provided an advantage for hunting small insects, e.g., orbital convergence that allowed for 3d-vision. Shortly thereafter, the angiosperm hypothesis was proposed, which claims that primate evolution is related to the adaptive radiation of angiosperms or flowering plants. Each of these hypotheses have been challenged over time, and it may be that each may play a part in explaining primate evolution. For more details on these hypotheses, you can check out this short article [optional]: The Origin of Primates.

In 2010, a controversial new hypothesis was proposed by Michael Heads. Heads suggests that volcanic eruptions and the breakup of the super continent, Pangea, lead to the emergence of the different lineages of primates. You can read more about Heads' hypothesis on LiveScience [optional].