Why should we care about primates and their ecology? Remember that evolution is always environmentally dependent, so the environment is the main thing that we have to consider when examining a primate, its biology, and behavior. Also, keep in mind that primates are not only affected by their environments, they affect their environments as well (by eating plants and insects, dispersing seeds, etc.).


There are two primary environmental factors that primate ecologists focus on: 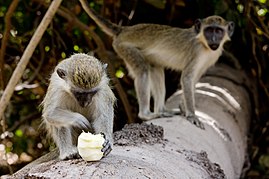 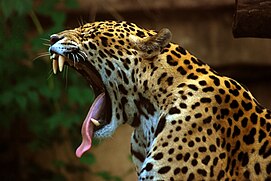 Primatologists also look at other environmental factors, such as: 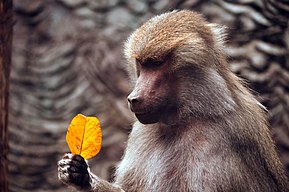 Baboon examining a leaf
Most primates are herbivores (they eat plant foods) and are fairly generalist in their dietary habits. Some primates are omnivores and eat lots of things (plant and animal).

However, some primates are more specialized. 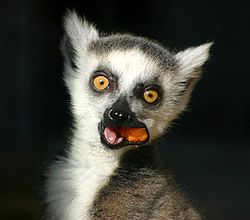 One of the challenges that primates face in their day-to-day life is a type of evolutionary arms race they have with their food. Some food items, like fruit, "want" to be eaten. In other words, it's evolutionarily advantageous for a fruit to be eaten by a primate, who then carries the fruit's seeds far away from the parent plant in its stomach, to deposit them elsewhere. The fruit benefits from this seed dispersal, thereby limiting competition between the parent plant and its offspring. This is one of the hypothesized reasons that fruits have high sugar or fat contents, to make them attractive to seed dispersers, such as primates and birds.

However, some food items, like leaves, don't "want" to be eaten. It's not evolutionarily advantageous for a plant to be stripped of its leaves. A leafless tree would not be able to perform photosynthesis and would promptly die. This is why plants have developed certain chemicals, called secondary compounds or antifeedants, in their leaves. These chemicals make the leaves unpalatable or indigestible to primates. In these cases, scientists have determined that primates have developed behavioral methods to avoid consuming antifeedants. For example, most leaf-eating monkeys prefer to eat young leaves, which are visually identifiable (either lighter in color or a different color) and higher in nutrients and lower in indigestible fiber and antifeedants, than mature leaves.

Not only have primates developed behavioral strategies to meet these challenges, some primates have evolved different types of color vision in order to forage for food and other primates have developed specialized digestive systems to deal with low-quality (high-fiber, high-antifeedant) foods. 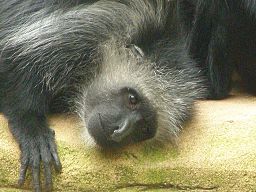 How a primate spends its time is called its activity budget.

These are comprised of the major categories of:

Why should we care about activity budgets?

Examining a primate's activity budget gives primatologists a good idea of how that particular primate (or primate group) "makes a living". For example, if squirrel monkey (pictured right) Group A spends 30% of its time foraging and squirrel monkey Group B spends 40% of its time foraging, then one can assume that there is something going on that is causing the difference. One can form possible hypotheses such as: Group B is larger than Group A and has more mouths to feed and therefore has to spend more time looking for food to feed them OR Group B has less food in its area than does Group A and so has to spend more time searching for it.

Remember also that if a primate has to spend more time eating or moving around in order to find something to eat, then they are having to spend less time either resting or socializing. Primates only have a finite amount of time in their day, so they have to maximize the use of it the best they can within their environmental parameters.


Activity budgets denote when a primate is "making a living": 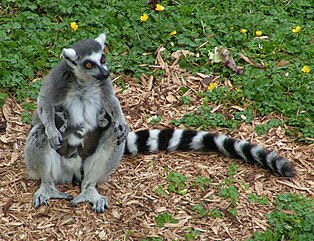 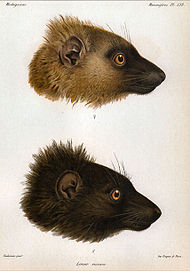 Note that these activity patterns are not hard and fast rules. As with diet, there is a lot of variation in how flexible a particular species (or group within a species) is when it comes to their activity patterns. For example, although traditionally thought of as strictly nocturnal, the activity patterns of owl monkeys have been found to be highly sensitive to environmental factors such as temperature and amount of moonlight.

One of the main factors that affects a primate "making a living" is feeding competition (competing with others for food).


There are two groups that a primate competes with; 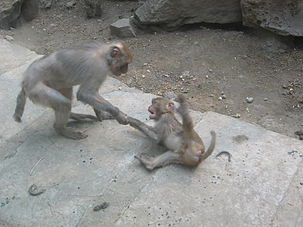 Macaques fighting
There are also two types of competition. The type of competition prevalent in a situation depends on the quality and quantity of food available in the environment.

In total, one can have:

Feeding competition can be severe and have serious effects on the health, well-being, and reproductive capacities of primates. In other words, it has a direct effect on their evolutionary fitness. As expected, primates demonstrate a lot of behavioral strategies to deal with the feeding competition they face. For example, a group with high scramble competition may spread out more when feeding so as to access more resources OR in a group with high contest competition, some individuals may form coalitions in order to "gang up on" other primates to take their food.

Spatial use: home ranges and territories

The area that a primate uses is its home range. The part of the home range that's used most often is the core area. Some species, such as snub-nosed monkeys, have very large home ranges (32 sq. km) and other species, such as the pygmy marmoset, have very small ones (0.003 sq. km). A primate's home range has to contain all of the resources it needs in order to survive (food, water, sleeping sites, etc.). The home ranges of different primate groups often overlap, sometimes only a little, but sometimes a lot. If the home range is physically defended, it's a territory.  Chimpanzees are famous for their territorial conflicts, which are so organized and violent that scientists have begun calling it "warfare".

As noted in a previous section (The Modern Non-Human Primates), one of the fundamental traits that primates share is that we are social creatures. All primates share some form of social structure with others of their own species, whether that be in a large permanent social group or as an individual who has repeated short-term interactions with others. The social relationships that primates have with other members of their own species have a huge impact on the individuals involved and are incredibly important to their health, well-being, and reproductive success. Therefore, the study of primate social behavior has been a focus of primatologists for the last 50 years. 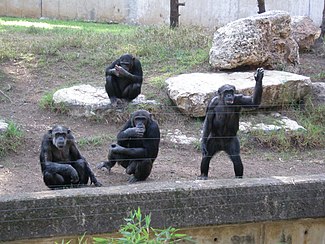 Social structure: the "whys" and the "hows"

The basic premise of why primates have certain social behaviors is due to reproductive asymmetry. Remember (from "Food", on this page) that females are under a lot more pressure than males to forage effectively because of the biological pressures they're under (due to the burden of reproduction).

It is precisely this inequality that causes the sexes to have different evolutionary priorities: 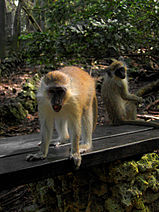 In order to achieve their priorities, male and females must utilize certain social strategies to gain success. 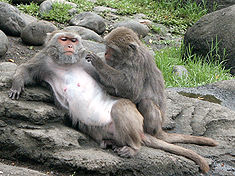 VIDEO: How bonobos use play as a tool

Why be in a social group? 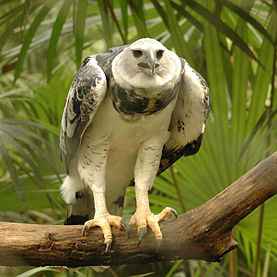 So, why would a primate choose to be in a social group if it is just one big mess of food competition, mate competition, and political posturing? Well, because there are benefits, of course!

Living in a social group:

- There are more eyes on the lookout for predators.

- An additional anti-predator benefit is known as "The Selfish Herd" (AKA safety in numbers). It basically comes down to "you don't have to run faster than the predator, just faster than the other guy".

- Some social groups will "mob" predators and drive them away. This only works on smaller predators, especially those who rely on surprise attacks (such as the Harpy Eagle, pictured right). 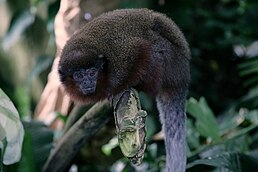 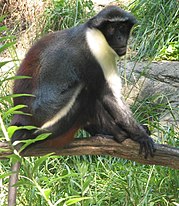 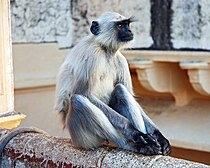 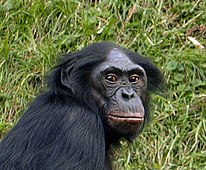 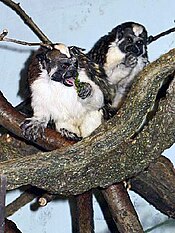 Next Page: Overview of the Strepsirhines