While there are different protocols used in science, it is performed using a set of rules called The Scientific Method that guide scientific practice (Fancher 2000). The method stresses the need to develop a testable hypothesis, the use of objectivity and rationality, and the circularity of scientific research. This does not mean that science is infallible, but in using the scientific method, particularly with the necessity to have testable hypotheses and tests that are replicable by other researchers, rigorous conclusions are reached.

Why do students of biological anthropology need to understand the scientifc method? Because anthropology is a science.

Steps of the Scientific Method 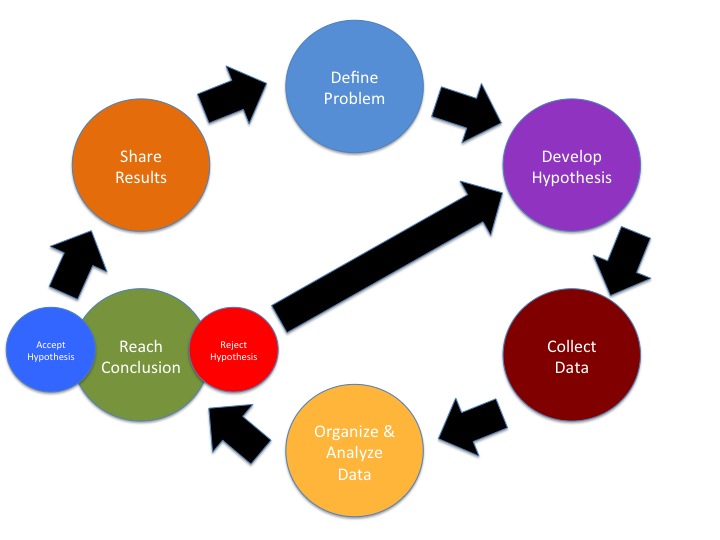 Diagram of the scientific method

This is based on observation -- either something you've observed from nature or from something that's already been written. How many times have you seen something or read about something and thought up a question about it? If you have, then you've done the first step of the Scientific Method!

Propose an explanation for the observed phenomenon. For a hypothesis to be a GOOD hypothesis, it must be testable. In other words, you must be ABLE to test it to see if it's supported or not supported. A hypothesis is still good, even if it's unsupported, as long as it's testable. There are lots of questions out there that are untestable, such as, "Somewhere on the planet, a pink elephant is dancing the can-can in a tutu." Because it's impossible to explore every inch of the world looking for our dancing elephant, this would not be feasibly testable. Along the same lines, a testable hypothesis would be, "Student group A, who have read the material on The Scientific Method, will have a higher average score on their quiz than will Student group B, who have not read the material on The Scientific Method."

The experiment should be specifically designed to test the hypothesis. The experiment will provide data as to whether the hypothesis is supported or not. Experiments must be replicable by other researchers. For our example above with ever-so-fortunate quiz-takers, you'd have Group A read the material (Group B would not) and both groups would take the quiz. This experimental design is replicable by other researchers because they too could find two groups of students, and follow the same protocol (one group reads the material, one not, and both take the quiz).

Once the experiment is completed, you must organize the data and analyze the results. For our example, you would grade the quizzes and calculate the average score per group.

It is important to share the results of your work even (and maybe even especially) if your hypothesis was not supported. This hasn't been a step in the "old school version" of The Scientific Method, but remember -- information is only good if it's communicated to others!

Things to keep in mind: