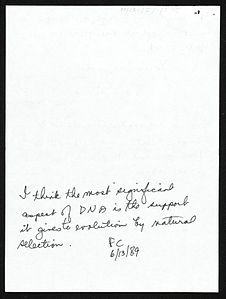 In this section, we will explore the theory of evolution since Darwin in more detail.

The Modern Synthesis incorporates data from multiple scientific disciplines: biology, the natural sciences, genetics, paleontology, and paleoanthropology. While the basis for evolutionary theory was established by the beginning of the twentieth-century, debate continued as to whether natural selection or mutation was more important in evolution. In the 1930s, these two points of views came together to form the basis of the modern synthesis. Fisher, Haldane, and Wright developed mathematical models that became the foundation of population genetics, a field that studies the "changes in gene frequencies and the effects of those changes on adaptation and evolution" (Larsen 2022: G16). However, it was Theodosius Dobzhansky that married theoretical modeling and empirical research in his seminal work, Genetics and the Origin of Species (1937) and signals the start of the Modern Synthesis (Artmann 2006). Biologist Ernst Mayr was another major contributor to the development of the modern synthesis. His work on the isolating mechanisms of speciation led to new insight into the evolution of new species. Mayr’s Systematics and the Origin of Species (1942) is one of the key works of the Modern Synthesis.

Emerging from the work of scientists of the Modern Synthesis, we know that evolution is a two-step process: 1. The production and redistribution of variation, and 2. Natural selection acts on variation resulting in differential reproduction among individuals in a population.

A population is a group of individuals from which mates are usually found. Sometimes this is referred to as a breeding population. All members of a population share a gene pool, which is all of the genes found among the individuals of the population. 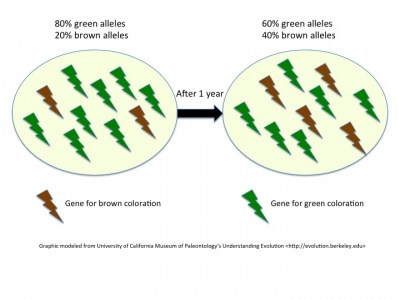 Scientists can study variation in a gene pool and differential reproduction in populations to determine allele frequencies, which is the frequency of an allele relative to that of other alleles of the same gene. Changing allele frequencies within a population from one generation to the next is the definition of evolution; specifically, this is microevolution. Macroevolution is change that occurs after many generations (hundred or thousands); e.g., speciation, which is the evolution of a species into a new species. “Macroevolution encompasses the grandest trends and transformation in evolution, such as the origin of mammals and the radiation of flowering plants (Evolution 101, 2015). Macroevolutionary events are reconstructed using data from living organisms, geology, and fossils. These are generally represented in a graphic form called a phylogentic tree (pictured below). Phylogenetic trees are a visual representation of proposed evolutionary relationships. They help researchers organize data. To learn more about phylogenetic trees check out Reading a Phylogenetic Tree. 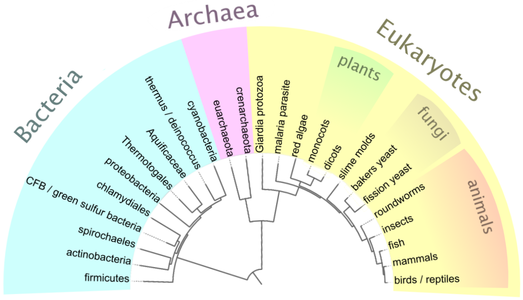 Step 1: Production and Redistribution of Variation

Mutation is a random change in the genetic coding and is the only new source of genetic material. Mutations occur during the DNA replication process. In an evolutionary sense, it is only mutations that occur during meiosis (replication of sex cells) that are hereditary. Many mutations do not have detrimental effects to the individual, but some do. If the mutations are extreme, pregnancy often results in spontaneous abortion (miscarriage). However, mutations provide a necessary pool of genetic variation in a population.

Illustration of a point mutation

Frameshift mutations occur when one or more nitrogenous bases are inserted into or deleted from the DNA sequence. The insertion or deletion causes the reading of the gene to be altered or stopped. It results in the production of a nonfunctioning protein.

Illustration of a deletion mutation

Illustration of an insertion mutation

Transposable elements are mutations that occur when pieces of DNA copy themselves into new areas of chromosomes. If this occurs in a non-coding segment of the DNA then there are little to no effects on the individual. If it transposes to a coding segment of DNA then serious consequences can occur. In extreme cases, entire chromosomes may be copied (a trisomy) or deleted (a monosomy).

Mutations may have no known cause. These are called spontaneous mutations. Mutations caused by environmental factors are called induced mutations. 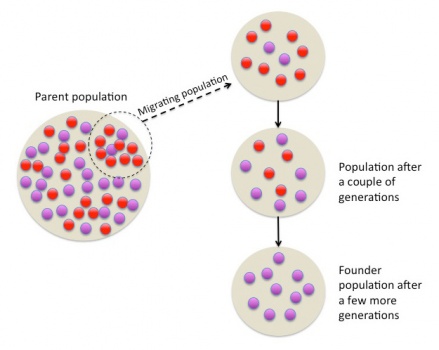 Genetic drift is the “…chance variation in allele frequency in small populations” (Gould 2006:1036). This can happen in a couple of ways: founder effect and bottleneck effect (or population bottleneck). Founder effect can occur if a small group separates from its parent group and settles elsewhere. Geographic isolation and endogamous marriage (human marriage pattern where mates are chosen from within a specific group, narrowing the gene pool) or mating practices restrict the gene pool, resulting in a lack of variation in comparison to the original parent population. If an allele is rare in the parent population, the small breeding population of the new group creates an environment whereby the rare allele can become common.

There are numerous examples of the founder effect among human populations. These include,

Bottleneck effect occurs when a population is drastically reduced in size due to some disaster, e.g., natural disaster, habitat destruction, or disease, leaving the surviving population with different allele frequencies as the original population. Four human population bottlenecks all related to climatic events have been identified. The most severe occurred about 70,000 years ago when a supervolcano erupted in Sumatra. It is estimated that only 5000 females survived in Africa (Ambrose 2003). 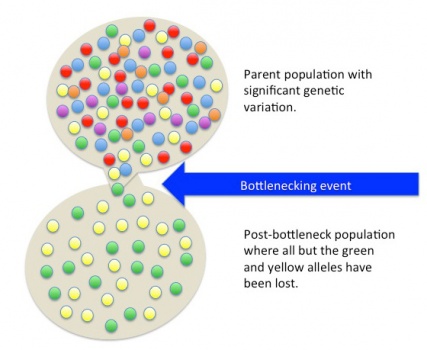 Illustration of the bottleneck effect

Gene flow, also called admixture or migration (in reference to people), is the "movement of genetic material within and between populations" (Welsch et.al. 2017: 72). For humans, gene flow generally occurs when people move from one location to another; however, in the modern world it is not out of the realm of possibility that someone’s genetic material could move with the actual human being leaving their hometown. It should also be noted that migration does not always result in gene flow. For gene flow to occur interbreeding must happen. Human populations have exchanged genetic materials for millennia, helping to explain why there is only one human species.

Gene flow effects evolution in a couple of important ways (Evolution 101, 2015): • With the introduction and reintroduction of genes to a population its genetic variation is increased, and • The movement of genetic material can make distant populations genetically similar to one another, which reduces the chance of speciation.

Recombination, or crossing over, can occur during meiosis. As the term implies, segments of chromosomes are exchanged between non-sister chromatids. This creates new combinations of genes that are not found in either parent (Speer 2003). 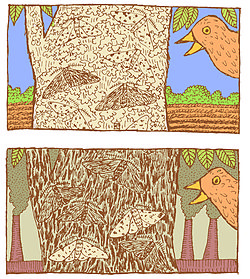 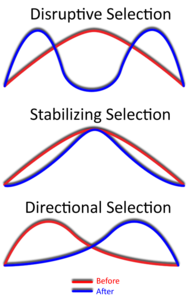 Once variation is produced in some combination of the above processes, natural selection goes to work, causing directional change in allele frequency related to environmental conditions that may result in evolutionary change, i.e., speciation. Shifts in allele frequency are called adaptation. In phrasing it this way, it sounds like natural selection works consciously, but it does not. Natural selection is a process that is mindless and mechanistic. Perfection and progress are not goals. It can only act on those variants that are present in a population. 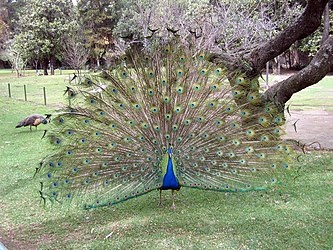 Darwin concluded, “…individuals with advantageous characteristics…survive in higher numbers and produce more offspring than members of a population lacking advantageous characteristics” (Larsen 2008: 96). This is referred to as differential reproduction or fitness. Specifically, fitness is defined by genotypes—some genotypes confer an advantage to an individual allowing that individual to reproduce at a greater frequency than another individual, characteristics that are inherited by their offspring. It could be something like beak shape that allows a bird to exploit resources better than other birds (think Darwin’s finches) or the color of wings that either hide or expose the peppered moth to predators (watch the Peppered Moth for the full explanation) or a coloring, like the plumage of a male peacock, that attracts mates (this is referred to as sexual selection, which is a special case of natural selection which refers to an individual's ability to attract and copulate with a mate) that lead to differential reproduction.

If you would like a bit more on the types of selection, check out Bio.edu: Stabilizing selection Disruptive selection Directional selection

Mayr (1942; quoted in Provine 2004) proposed the most commonly referenced definition of species, “Species are a group of actually or potentially interbreeding natural populations, which are reproductively isolated from other such groups.” This definition is often referred to as the biological species concept. A key factor is that a species actually or potentially breeds in nature. However, this definition can be difficult to apply; e.g., organisms that reproduce asexually or organisms that form hybrids (carrion crows and hooded crows sometimes interbreed—are they one species or two species?). The biological species concept falls apart when applied to the fossil record, as it is impossible for scientists to observe the breeding behaviors of extinct organisms. Because of this, fossil species are called paleospecies and can cover long periods of time. Paleontologists and paleoanthropologists use comparative analysis with contemporary species that are closely related to determine whether variation seen in fossil specimens is intraspecific (differences within a species due to age and sex) or interspecific (differences due to reproductive isolation). It is important to remember that the species or paleospecies name is a classificatory tool used in the sciences. It helps scientists organize information and communicate more easily with one another.

Speciation is “…the process by which a new species evolves from an earlier species (Jurmain et al 2013: 105). This idea is one of Darwin’s five theories, specifically those of common descent and multiplicity of species, whereby new species arise from earlier species. 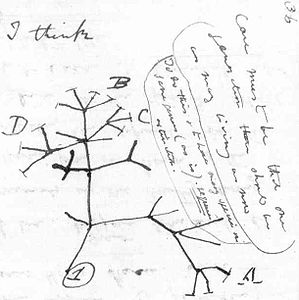 If you would like to read more about the concepts introduced on this page, check out the following web sources:

Darwin's Theory of Evolution by Ker Than.