One of the most striking things about humans is the huge range of biological variation we have as a species. In the previous section, we explored the mechanisms of change involved in the evolution of populations (mutation, migration/gene flow, genetic drift, and natural selection). In this section, we'll look at how those affect human populations to create human diversity.

A polymorphism is when a gene has at least two different alleles (and each allele is in more than 1% of the population).


ABO blood type is a perfect example of a polymorphism, which, you will recall, means there are two or more alleles at a locus. In the ABO blood group there are three alleles (A, B, and O) prevalent in most human populations. There are a few populations in the world which are not polymorphic. The O allele occurs in almost 100% of South American indigenous populations and is remarkably high in aboriginal groups in northern Australia. This is most likely due to genetic drift. When alleles vary geographically, they have a clinal distribution. As you can see in the maps below, B is more common in Europe and Asia, and A is found in high numbers in Asia and central Africa.

Map of blood group A

Map of blood group B

You can learn more about the ABO blood group from theAmerican Red Cross.

For example, the map below shows the distribution of a group of genes called Haplogroup F (found on the Y chromosome) throughout the Middle East, Europe, and Asia. Presumably the distribution of the genes follow the movement of peoples as they dispersed from India outward. 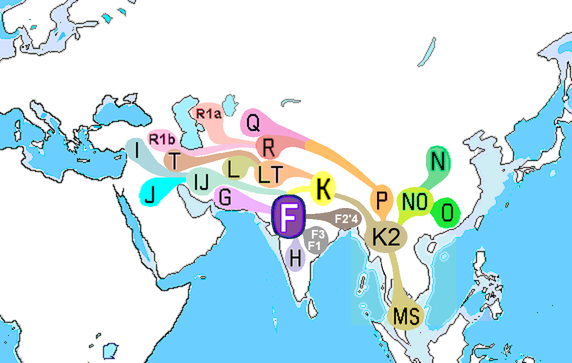 While some clinal distributions are due to migration (gene flow), others have been shaped by natural selection. 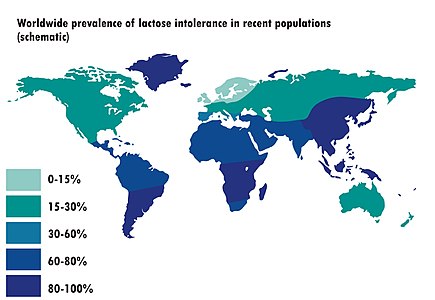 The original human condition (found in most southern European, Asian, and African populations) is an inability for adults to digest lactose, the primary sugar found in dairy products. This is known as lactose intolerance and it has a genetic basis. Lactose intolerance can be a particularly unpleasant condition for those who consume dairy products and cannot digest them. Symptoms include diarrhea and intestinal gas.

However, some populations of people have developed an ability to digest lactose.

This is how that came about:

This is biocultural coevolution between the domestication of dairy-producing animals in those populations and an increase in the prevalence of the lactose tolerance gene. In other words, the biology of the people was affected by their cultural behaviors and vice versa.

Sickle cell anemia is a very serious genetic disease that affects the hemoglobin in the blood. 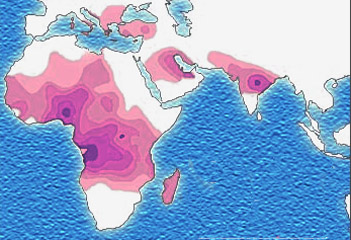 So, as we learned before about alleles and genotypes, when there are two alleles, there are three genotypes. In this case, the genotypes and phenotypes are:

Sickle cell anemia is a good example of the interaction of biology, environment, and culture. It has a fascinating biological interaction with the infectious disease malaria, which in turn is associated with agricultural practices. It has been found that those with sickle cell trait, i.e., people with the HbA/HbB genotype, are less likely to get malaria. Malaria is a disease caused by a parasite, Plasmodium. This life-threatening disease is transmitted through the bites of Anopheles mosquitos. Symptoms include fever, headache, chills, and vomiting. In severe cases, anemia, respiratory distress, or death may occur. Malaria in sub-Saharan Africa is associated with the spread of slash-and-burn agriculture and irrigation.

This is called the heterozygote advantage, because the heterozygotes are better off than either one of the homozygotes. It's this advantage that keeps the HbB allele present in certain populations, which is an example of a balanced polymorphism.

A little fun with malaria: Malaria the video game

Humans have biological plasticity, or an ability to adapt biologically to our environment. An adaptation is any variation that can increase one's biological fitness in a specific environment; more simply it is the successful interaction of a population with its environment. Adaptations may be biological or cultural in nature. Biological adaptations vary in their length of time, anywhere from a few seconds for a reflex to a lifetime for developmental acclimatization or genetics. The biological changes that occur within an individual's lifetime are also referred to as functional adaptations. What type of adaptation is activated often depends on the severity and duration of stressors in the environment. A stressor is anything that disrupts homeostasis, which is a "condition of balance, or stability, within a biological system..." (Jurmain et al 2013: 322). Stressors can be abiotic, e.g., climate or high altitude, biotic, e.g., disease, or social, e.g., war and psychological stress. Cultural adaptations can occur at any time and may be as simple as putting on a coat when it is cold or as complicated as engineering, building, and installing a heating system in a building.

This form of adaptation can take moments to weeks to occur and is reversible within an individual's lifetime no matter if it occurs when one is a child or an adult.

Short-term acclimatization can occur within seconds of exposure to a stressor. This type of response quickly reverses when the stressor is no longer present. Imagine stepping out of an air-conditioned building or car into a 90 degree day. Your body will quickly begin to perspire in an attempt to cool your body temperature and return to homeostasis. When the temperature declines, so will your perspiration. Tanning is another short-term response, in this case to increased UV-radiation exposure especially during summer months, which can occur within hours. Tans are generally lost during the winter when UV-radiation decreases.

Click on this link to watch a fantastic video explaining the interplay of skin color, UV, and vitamin D. 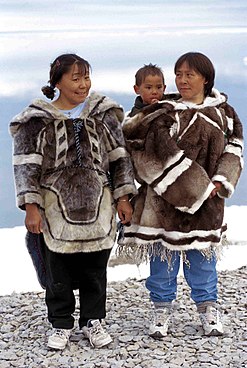 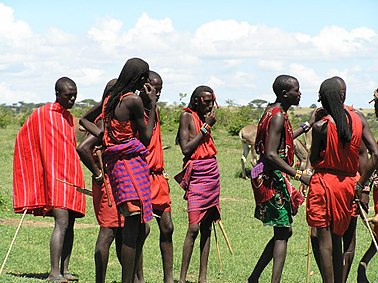 There are two ecological rules, known as Bergmann's rule and Allen's rule, that explain the variation in size and shape of bodies and extremities using latitude and temperature.

Bergmann's rule: Warm-blooded animals tend to have increasing body size with increasing latitude (toward the poles) and decreasing average temperatures.

Allen's rule: A corollary of Bergmann's rule that applies to appendages. Warm-blooded animals tend to have shorter limbs with increasing latitude and decreasing average temperatures

This has been applied to humans. The idea is that populations toward the pole tend to be shorter and have shorter limbs than do people on the equator.

For example, the Inuit people of Canada (pictured above) tend to be shorter than the Maasai people of Kenya (pictured below):


and the American Association of Physical Anthropologists statement on race

What are they saying?

Further explore the concept of race, its history, and human variation.