As we learned in Unit 1, Carolus Linnaeus developed what is known as the Linnaean system of classification. This basic system is still used today, although it is focused on illustrating evolutionary relationships between organisms. This may sound familiar and it should---think phylogentic tree! Now we take a moment to look in more depth at classification.

This hierarchical system organizes organisms into ever increasingly similar categories. Linnaeus’ system has been modified from when he originally published Systema Natura in 1735. He published ten editions of the book, adding new levels to the hierarchy. 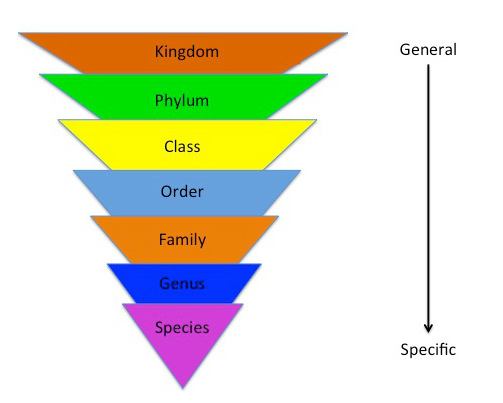 According to the Linnaean system, human beings are classified as follows (Larsen 2008: 36):

Subkingdom  Eumetazoa               all major animals except sponges that contain true tissue layers, organized as germ layers, which develop into organs in humans

Phylum           Vertebrata               group of vertebrate and invertebrate animals that have a notochord, which becomes the vertebral column in humans and other primates

Class              Mammalia               group of warm-blooded vertebrate animals that produce milk for their young in mammary glands; they have hair or fur and specialized teeth

Suborder        Anthropoidea          group of primates, including monkeys, apes, and humans, but not prosimians; they have long life cycles and are relatively large-bodied

Family            Hominidae               group of anthropoids, including humans and great apes, and human ancestors; they have the largest bodies and brain sizes of all the primates

Taxonomy or systematics is the field that establishes the rules of classification. As established by Linnaeus, organisms are first classified by their physical similarities. Remember, today classification is interested in illustrating evolutionary relationships, so it is not enough simply to establish that there are physical similarities; it is important to try and understand how the similarities arose…was it because of a close common ancestor or some other reason.

To begin classification, researchers identify anatomical features that have the same function as that of similar structures in other species. Then they determine whether the similar features are due to a homology or analogy. A homology is a trait found in two or more different organisms that was inherited from a common ancestor. The more homologies shared by two organisms, the closer the genetic relationship. The structure of your arm, the wing of a bird, the fin of a whale, and the forelimb of lizard are examples of homologies. Confusing? Think of this as cousins who inherit the same trait from their grandfather (Understanding Evolution). These types of traits are called homologous structures or simply, homologies. Click here for another image.

However, not all similarities are homologies. An octopus has limbs, but the structure is not the same as the tetrapods referred to above. Octopus limbs evolved independently after they split from their shared ancestor with tetrapods. This type of similarity is called an analogy or analogous structure. How can analogous structures evolve in separate species? Analogies are a response to similar pressures. The Understanding Evolution website has a short animation that helps to explain this: http://evolution.berkeley.edu/evolibrary/article/0_0_0/similarity_hs_08.

In order to determine whether a trait is a homology or analogy, researchers have some criteria to help them make the determination:

Researchers also try to distinguish whether or not structures are due to parallel evolution or convergent evolution. Parallel evolution refers to situations where organisms that are unrelated or distantly related have similar adaptations because of similar environmental pressures. When parallel evolution occurs “in distantly related [organisms] that are morphologically similar in overall appearance” (Armstrong 2002-2008) it is called convergent evolution. An example that will hopefully make this concept more clear comes from the plant world. Cactaceae (North American cactuses) and Euphorbiaceae (South American euphorbias are distant relatives that both have characteristics we attribute to succulents—thick stems, spines, and adapted to deserts, but they belong to different plant families). 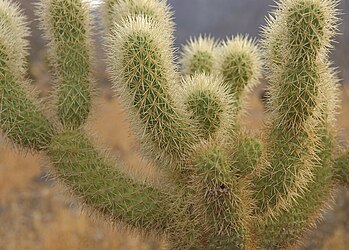 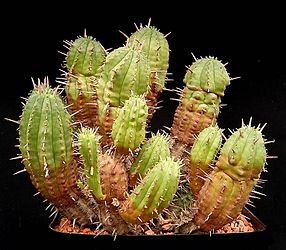 Some scientists use the terms interchangeably, making them even more confusing then they already are; this group of scientists proposes that what we are seeing are two different ends of a continuum. They suggest that we simplify terminology and call it convergence. To help make the distinction between 1) similarity due to a common ancestor and 2) similarities due to distantly related ancestors, some researchers use the term homology to refer to the former condition (#1 above) and homoplasy to refer to the latter (#2 above) (Armstrong 2002-2008).

Cladistics, or phylogenetic systematics, also reconstructs evolutionary relationships but only uses derived homologous characters. Derived traits are those characters that are different from the ancestor in form or function. An example of a derived trait for humans is the chin. Ancestral traits, which are sometimes referred to as primitive traits, are those characters inherited from the ancestor. For humans, the opposable thumb is an ancestral primate trait. Cladistic evolutionary relationships are presented in a cladogram and do not indicate time. Groups of organisms that share a common ancestor are part of clade.

Learn more about Reading Phylogenies and Cladograms from the Understanding Evolution web site.

O’Neill D. c.1998-2012. Classification of living things: An introduction to the principles of taxonomy with a focus on human classification categories [Internet] [cited 2015 Jun 8]. Available from: http://anthro.palomar.edu/animal/default.htm