This experiment has been tried and is trusted. 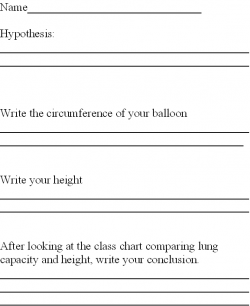 This activitiy will help students to gain a better understanding of their lungs and how they work. They will learn about lung capacity and be able to measure their own lung capacity. Before beginning the experiment, the students will see how the lung works by using a soda bottle as well as a demonstration of the diaphragm. Students will then create a hypothesis about lung capactiy and height. After that they will begin the balloon experiment to measure their own lung capacity. They will measure the circumference of the balloon they have blown up with the measuring tape. As a class they will compare their lung capacities with their heights.

For the original experiment, teachers had an already created balloon dome to represent a diaphragm. If teachers can find materials, they can create this dome as well:

<kaltura-widget kalturaid='315472' size='L' align='R'/> Students will be creating a graph comparing height to lung capacity with height on the "x" axis and lung capacity on the "y" access. After all results are tabulated, the class will compare their personal results with the results of their classmates and analyze the shape of the graph and what that means about the data. Also, students will be measuring the circumference of their balloon with the string and then with the measuring tape.

Students demonstrate understanding of the human body — heredity, body systems, and individual development — and understand the impact of the environment on the human body.

Students use statistics and probability concepts. This is evident when students: a.Collect, order, display, and analyze data in order to answer a question or test a hypothesis

Overall, I believe that this experiment went very well when we tested it with the students. The sheep lung, balloon lung dome, and the bottle lung worked very well to gain the student's attention. They enjoyed seeing how these demos worked and were interested to learn how these demonstrations related to their lungs. When it was time to test the student's lung capacity they were all very excited because they were given the chance to blow up their own balloon. They enjoyed testing to see how big they could make the balloon in one breath. It definitely helped that we had stretched out the balloons before giving them to the students. The students each made a hypothesis before we started the experiment. I believe that making the graph to show the results of the class helped the student's to visualize the correlation between their height and their lung capacity. The student's were also interested to see where they showed up on the graph compared to their classmates.

While performing the experiment, our group came across one difficulty we did not forsee. One student was unable to blow up a balloon. This was not due to their lung capacity, but to their lack of knowledge of how to blow a balloon, which can be difficult for kids to learn at this age. To overcome this obstacle quickly, I had the student begin on my mark to exhale while I blew into the balloon; once the student had finished their one breath, they told me to stop blowing. Although this was a very inaccurate measurement of the student's lung capacity, without a balloon, the student seemed defeated. It is thus important to stretch the balloons a lot before giving them to the students and make sure every student can blow into a balloon. One other issue we did not forsee was that many of the students asked us teachers to tie their balloons. This was unsanitary, for the student had left their saliva on the balloon. It may then be a good idea for the teachers to wear gloves while tying the balloons to prevent the spread of germs to the students and to the teachers as well. Also, while waiting for their turn to use the measuring tape, many students began to color on their balloons. However, all that was available to them was magic marker, which quickly came off their balloons and onto their clothes and desks. It would be beneficial to give students permanent markers in order to keep them occupied while waiting, but make sure they do not get the marker on their clothes.