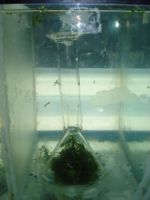 1a. Photograph shows aquarium full of water with Elodea plants placed under a glass funnel with a test tube placed on top of it. Sodium Bicarbonate has been added and it has been placed under direct light source to produce oxygen.

1b. Photograph shows household model using an aquarium full of water and Elodea Plants placed under the top of a two-liter bottle. There is a baby food jar placed ontop of the two-liter bottle cap opening, placed under a direct light source, and sodium bicarbonate has been added to the water to produce oxygen.

2a. Photograph shows Emily adding a tablespoon of sodium bicarbonate to the water in the aquarium to assist the Elodea plants in producing starches and released oxygen.

2b. Photograph shows Emily nesteling Elodea plants in the center of the two-liter bottle opening prior to placing it in the aquarium.

For Model Photograph Refer to 1b. 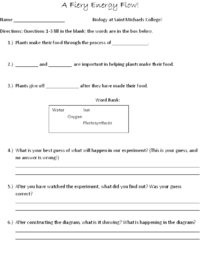 This activity is designed to visually express energy flow and photosynthesis in an ecosystem. In this activity students will put water plants into an aquarium and place it under a light source. Oxygen bubbles will build up in a test tube. After enough oxygen bubbles have built up remove the tube and place a match into the tube that has been freshly blown out. The match should reignite providing an exciting demonstration of how the sunlight transferred energy to the plant, which in turn produced the oxygen that reignited the match.

Refer to photograph 1a.

Science Hint! Purpose of Sodium Bicarbonate: Sodium Bicarbonate is added to the aquarium to mimic the carbon dioxide that would naturally be in the environment to help the plant construct the startches that make its food.Refer to Photograph2a

Purpose: Allowing the students to help in the building process lets the students see first hand the important elements of the experiment and allows them to talk about and make predictions - an important step in the scientific method.

Purpose: To assess the student's prior knowledge of photosynthesis and allow them to analyze the model to construct a prediction prior to the demonstration.   [5] Creating a Diagram:

Purpose: To assess the lesson and apply it on a larger scale than the class-room experiment. Students become involved and use their artistic talents to create. They also leave the lesson with a visual aid for understanding energy flow and the process of photosynthesis.   [6] Lesson Wrap-up: Time for any last comments, questions, extra time to work on diagrams, and clean up time. We would also read the book Trout are Made of Trees by April Pulley Sayre (Author) and Kate Endle (Illustrator)and Photosynthesis: Changing Sunlight into Food (Nature's Changes)by Bobby Kalman, to culminate this lesson. We will then discuss with the students the next steps.

Carbon dioxide is an end product in organisms that obtain energy from breaking down sugars, fats and amino acids with oxygen as part of their metabolism, in a process known as cellular respiration. This includes all plants, animals, many fungi and some bacteria. In higher animals, the carbon dioxide travels in the blood from the body's tissues to the lungs where it is exhaled. In plants using photosynthesis, carbon dioxide is absorbed from the atmosphere.

Role in photosynthesis Plants remove carbon dioxide from the atmosphere by photosynthesis, also called carbon assimilation, which uses light energy to produce organic plant materials (cellulose) by combining carbon dioxide and water. Free oxygen is released as gas from the decomposition of water molecules, while the hydrogen is split into its protons and electrons and used to generate chemical energy via photophosphorylation. This energy is required for the fixation of carbon dioxide in the Calvin cycle to form sugars. These sugars can then be used for growth within the plant through respiration.

Even when vented, carbon dioxide must be introduced into greenhouses to maintain plant growth, as the concentration of carbon dioxide can fall during daylight hours to as low as 200 ppm. Plants can potentially grow up to 50 percent faster in concentrations of 1,000 ppm CO2 when compared with ambient conditions.[30]

Plants also emit CO2 during respiration, so it is only during growth stages that plants are net absorbers. For example a growing forest will absorb many tons of CO2 each year, however a mature forest will produce as much CO2 from respiration and decomposition of dead specimens (e.g. fallen branches) as used in biosynthesis in growing plants.[31] Regardless of this, mature forests are still valuable carbon sinks, helping maintain balance in the Earth's atmosphere. Additionally, and crucially to life on earth, phytoplankton photosynthesis absorbs dissolved CO2 in the upper ocean and thereby promotes the absorption of CO2 from the atmosphere.[32]

Source and for further information on photosynthesis:

It is important to us as teachers that the students not only learn and retain the information on photosynthesis and energy flow but also that they enjoy the lesson and get to show their parents what they did in school. The Photosynthesis Diagram allows students to use their creativity to express the information they have learned about science and the world around us. This lesson plan was created to fit within a twenty minute block, however, if you have the time to have your students cut the different pieces of the model it is simple and fun to do. They will need to cut: oxygen, water, sun, a human, and a plant. The different pieces of the diagram can be different if you prefer a flower or a picture of the student rather than the human cut-out. Be Creative! 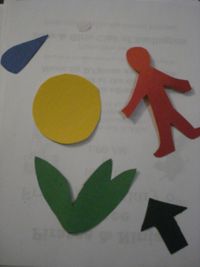 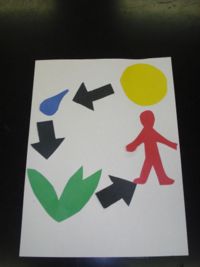 3b. Photograph shows our construction of the photosynthesis model. Including: oxygen, water, sun, human, plant.

The following are terms that will come up during the experiment. It may be helpful to define these before.

7.1.c. Create hypotheses for problems, design a "fair test" of their hypothesis, collect data through observation and instrumentation, and analyze data to draw conclusions; use conclusions to clarify understanding and generate new questions to be explored.

7.1.e. Explain a variety of observations and phenomena using concepts that have been learned;

7.3.b. Look for evidence that explains why things happen.

7.11.a. Demonstrate understanding that systems are made of interrelated parts that influence one another.

7.11.b. Demonstrate understanding that systems include inputs, processes and outputs.

7.13.c. Describe and show examples of the interdependence of all systems that support life (e.g., family, community, food chains, populations, life cycles, effects on the environment), and apply them to local systems;

7.15.a. Identify and record evidence of change over time (e.g., erosion, weathering, fossilization)

After completing and working with your students on this experiment you can take the concepts they have learned and apply them to other things in your classroom. Why not create a fish habitat or aquarium? Maybe your class could start composting?

This is also a great time to talk with your students or remind your students that releasing organisms that are purchased (like the plants you used in your experiment) should never be release into the environment.

Our group was motivated and excited to do this experiment and lesson plan with our students. However, after a few minor disasters we were unable to do it and had to use a previous group's experiment.

What Did Not Work:

Tips for Trying It:

What Worked! Our group was fortunate enough to have the capacity to use a past group's experiment. Outrageous Ooze

We adapted their lesson plan to approach what we wanted to achieve with our students. We wanted to demonstrate states of matter and experiment through the scientific method. The lesson plan went as follows: 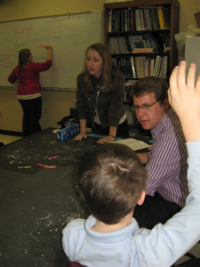 4.a This is the first step in our lesson plan, which is discusing the definitions of a solid and a liquid. 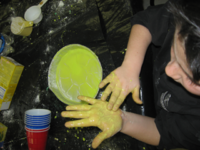 4.b This is the second to last step in our lesson plan, where a student is shown making his own ooze.