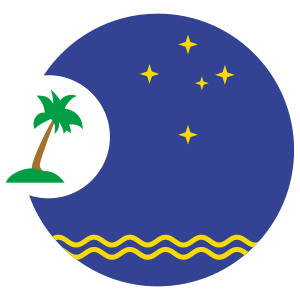 The logo of the Pacific Islands Forum (PIF). An important inter-governmental organisation in the region, the PIF aims to promote and enhance cooperation among the independent states of the Pacific region.

Thinking about regional relations in the Pacific

As stated earlier in the course, one of the problems with the categorisation of an Asia-Pacific region is that the island states of the Pacific are often overlooked.

As demonstrated by the previous Unit, since the cessation of the Second World War Asia has been a dynamic and changing region. However, the Pacific islands have not attracted the same level of international attention as states in Asia. The Pacific region has also not received the same level of economic development or direct foreign investment as many states in Asia have received. Nonetheless, the Pacific region has been a dynamically changing area in its own regard.

The Pacific states have had to reposition themselves on the global stage, seeking out ventures and partnerships that are in their national interest.

The Pacific has also been an area of political coups and instability. This has affected how the Pacific region is viewed by other states, demonstrated by the unflattering categorisation of it being part of an ‘arc of instability’. Environmental issues have also had continued salience in the Pacific. In the previous century, French nuclear testing and its polluting effects were of critical concern. In the 21st century, the very real threat of rising sea levels associated with human induced climate change have become issues of critical importance throughout the Pacific.