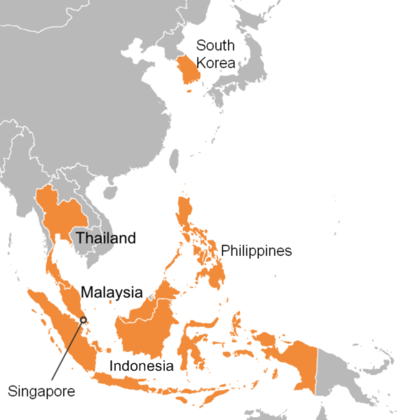 In the 1980s and early 1990s, Asia was the world’s most dynamic centre of trade growth and economic output. The northeast Asian economies in particular were known as the ‘tiger’ economies as they went from strength to strength.

Regionalism, specifically economic regionalism, was a common feature of Asian economic development. It led to the formation of regional economic groupings that sought to attract direct foreign investment. These groupings offered favourable economic incentives to multinational corporations looking to set up manufacturing plants in states where they could maximise their profits.

However, this dynamic growth was marked by unhealthy traits and in the late 1990s, economic crises spread across Asia, causing millions of people to fall into unemployment and poverty. During the Asian Financial Crisis, the tiger economies looked more like ‘paper tigers’, lacking in substance, and the region was forced to re-evaluate its economic position and practices.

Your self-directed reading for this Section should see you explore the main historical, theoretical and policy developments that have led to closer economic integration and cooperation in Asia.

You should then explore the rapid growth of regional trading partners in the Asian region, particularly the northeast Asian economies such as South Korea, Japan and China.

You should also locate sources on contemporary economic relations among regional trading partners in Asia.

Finally, it is important that you identify and describe the major financial tensions and crises that have impacted the region.