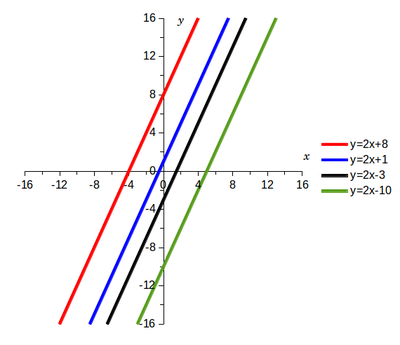 Study the 4 lines represented in the graph at right. Note that the equation for each of these lines (with the corresponding color) is shown to the right of the graph.

How are the four equations alike? And, where are they different? Look at the graphs of the four lines.

Can you see what the numbers in the equations represent on the graphs?

The slope-intercept form of a line is written as:

Here are two examples. To see the resulting equations, click the show/hide triangle on the right.

Write the equation of the line with a slope of -4 and a y-intercept of 7.